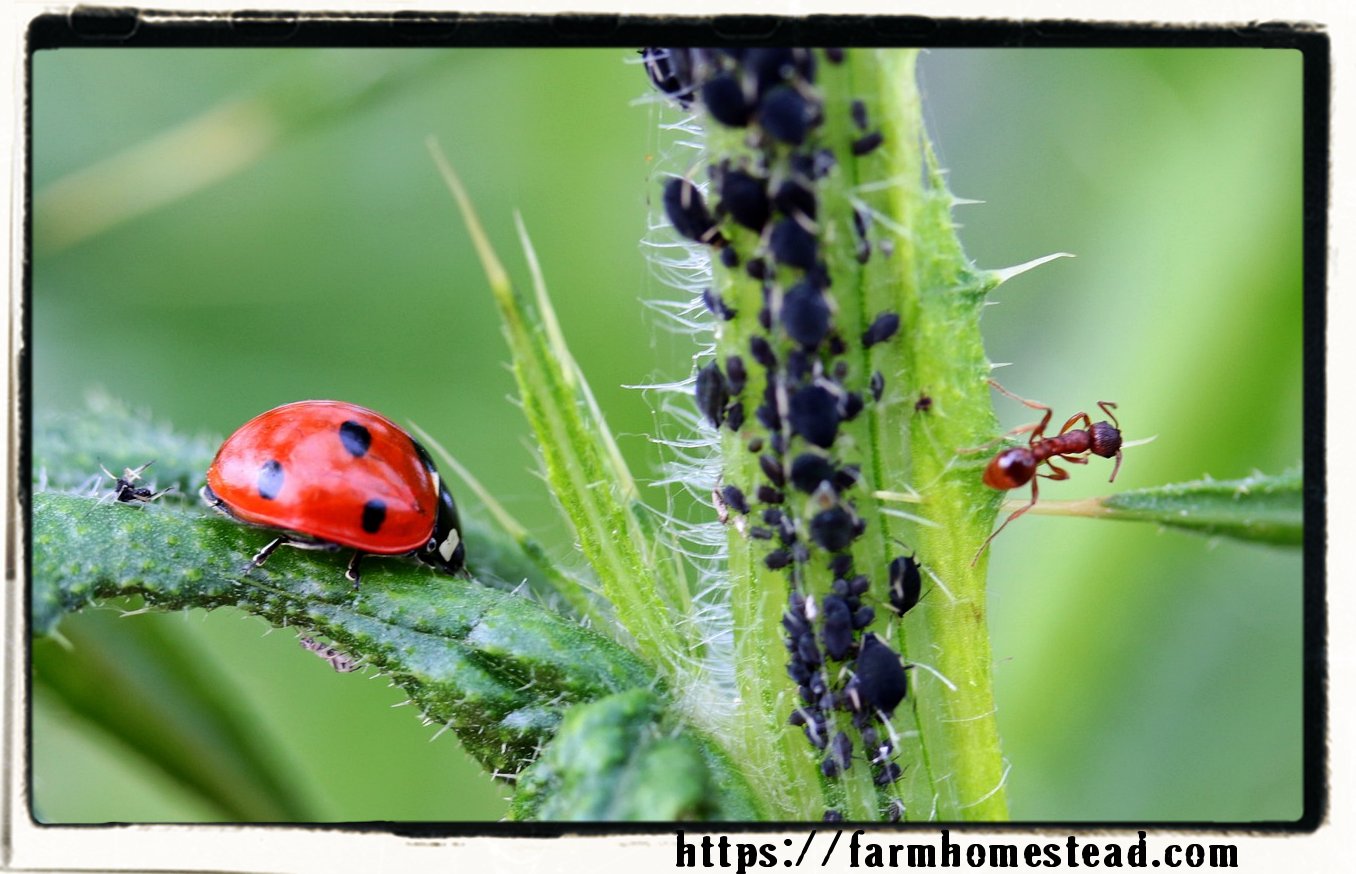 The Garden as Ecosystem

Twenty five years ago, Integrated Pest Management (IPM) seemed a utopian dream to mainstream agriculturalists. The idea that plant pests could be kept at acceptable levels without large amounts of chemical pesticides ran counter to everything they had been taught. But now IPM is embraced by nearly everyone involved in the field. What has caused this turn around?

First…
When chemical pesticides were first introduced in large quantities in the 1940s, they were seen as miracles of modern life. Now all farmers had to do was spray their crops with DDT, or some other chemical, and they could achieve complete control.

But within a couple of decades, problems began appearing. The most important of which is the environmental harm done by chemicals which are both toxic and persistent. Even 25 years after being almost totally banned in the U.S., DDT can still be found in the tissue of animals.

But even disregarding environmental concerns, there were a number of other factors that called into question the wisdom of such uninhibited use of chemicals. First, when using an insecticide to control a pest, its natural predators are often killed off as well. This can have the unintended effect of actually causing an upswing in the pest population.

Second, many insects can very quickly develop populations resistant to a given chemical.

And third, when one pest is eliminated the door is opened to others that were less apparent before their competition was killed off. At first the solution to these problems seemed to be to just use more, or different, chemicals, but eventually it became obvious this was no more than a good way to line the pockets of chemical manufacturers.

The first tenet of IPM is to try to avoid the problem in the first place. Plants have natural defenses against pests. Problems are more likely to occur when a plant is stressed by its general condition. A plant that receives inadequate moisture or too much sun is less able to put up a resistance to the onslaught of insects.

And those that are planted in too shady a spot, are planted too closely together or get watered in late evening are more likely to suffer from fungi. To minimize problems with fungi, make sure the plants are mulched, have plenty of air circulation and are watered in morning. Try to keep them outside the drip lines of nearby trees and remove the severely damaged twigs and foliage.

Many insects feed primarily on just one genus, or even species, of plant. For instance, the rhododendron lace bug, Stephantis rhododendri, feeds almost exclusively on rhododendron. While its cousin, S. pyrioides, feeds mostly on azaleas. Large, single-species groupings of plants, so popular with landscape designers, are a sure way to create problems.

By the time you notice the Corythucha cydoniae (yet another lace bug) in that huge bank of cotoneaster, it will be too late. Within a few weeks they will have a permanent footing and you will be locked into periodic sprayings of insecticides. By diversifying your plantings you minimize these risks. This doesn’t mean you can’t have small groupings of particular species or cultivars, just avoid those truly massive displays.

If you want to avoid using chemicals entirely, you may have to do without some plants. Except in ideal conditions, most hybrid roses require regular sprayings. Then again, if you can be satisfied with the less dramatic blooms of the rugosas or other landscape roses you can minimize the use of fungicides and insecticides and perhaps avoid it altogether.

Picking the right plants for the right places, planting them properly and giving them adequate care are key to minimizing the use of pesticides. 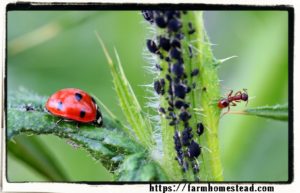 Integrated Pest Management involves using a variety of methods to control pests. But more importantly, it involves deciding when to use those methods. The point is to only deal with pests when the health of your plants or their aesthetic value is in jeopardy.

The latter is obviously a somewhat subjective call, but we all need to realize that no matter what, we will have pests in our gardens. For instance, in my garden I frequently see dozens of aphids munching on my Irises. But they have no effect on the blooms and they can’t even be seen without looking closely.

If I spray them (even with an insecticidal soap), I may harm my very healthy population of praying mantises by
eliminating part of their food supply (they love to dine on aphids). These insectivores may be holding in check
other pests that I’m not even aware of. So by spraying my Irises for aphids, I may be endangering other plants to other insects.

A lawn is another example of a situation where the best solution is often to do nothing. Assuming one of the
reasons you have a lawn is so children can play on it, you might want to avoid using chemical weed killers.

If you’ve planted the right grass for your area, and take care of it properly, it will generally be strong enough to compete.

There are a myriad of natural controls at work in your garden. Lady beetles, mantises and spiders are all there
eating insects. Parasitic wasps lay their eggs in the larvae of other insects where they hatch and devour them from within. And as mentioned earlier, healthy plants themselves produce a variety of means for controlling pests.

You can purchase lady beetles, parasitic wasps and mantis egg casings for release in your garden, but they are probably there already. If someone has been a little heavy handed with insecticide, it may be worth purchasing some of these predators to replenish their populations. Otherwise, introducing more than your garden can sustain will either cause a massive die out or a migration to greener pastures.>

Either way you’ve wasted your money.

The best way to maintain a healthy population of predators is to avoid using insecticides, and when you do use them, make sure you are only applying them to the areas at risk.

Do what we can, summer will have its flies.
– Ralph Waldo Emerson

When You Have to Use Chemicals

There are times when your only choice will be between using chemical pesticides or losing your plants. Maybe a particularly wet summer has brought on a fungus that is killing one of your favorite shrubs, or out of nowhere an insect has appeared that is quickly defoliating a small tree. Plants that have led seemingly carefree existences are suddenly at death’s door.

The problem now is to determine what is the proper pesticide to use. For many, this involves going to the local nursery or garden center and asking someone there for help. But you need to remember, a big part of their business is selling chemical pesticides, and the most popular reference book used by garden centers is freely supplied by (surprise!) a large chemical manufacturer.

And guess what it invariably recommends? According to many books, there is rarely a case where one chemical or another (and often several at once) isn’t in order.

You need to try and learn for yourself what is appropriate. First determine what you are fighting and then find the treatment that poses the least risk. Since you’re on the Net, try posting a description of your problem in one of the forums, perhaps the Integrated Pest Management forum or the Living With Bugs website.

Before you buy a pesticide, make sure it is intended to deal with your particular problem. This information should be on the label or in the accompanying literature.

One piece of information that can help you minimize your exposure to toxins is the meaning behind the different terms on pesticide labels.

In the U. S., the Environmental Protection Agency determines the toxicity of pesticides based on how much of the chemical would be required to kill off 50% of an animal test population. It then ranks them into four groups: highly toxic, moderately toxic, slightly toxic and relatively toxic.

Those in the highly toxic category must have the word “Danger” on their labels.

Those that are ranked as moderately toxic must carry the word “Warning.” The labels for those in the least toxic categories must contain the word “Caution.”

Nine times out of ten, there is a less toxic substitute for those pesticides marked “Danger” and “Warning.” For
instance, benomyl is a systemic fungicide that is very effective in dealing with a wide spectrum of fungi. And it is less toxic than many household cleaners!

Insecticidal soap can be used against all sorts of soft-bodied pests, including many scale, and it poses almost no threat to plants, humans or other animals. It is a good rule to limit yourself to those pesticides marked “Caution.”

Before you use any pesticide, read the label carefully. If it must be delivered through a spray, never apply it on a day with even a moderate amount of wind. With the spray drifting about, your clothing will act as a wick to soak up the airborne solution. Having the proper ratio of pesticide is important.

Sprayers that fit on the front ends of hoses (especially those that allow you to adjust concentrations) rarely
deliver consistent solutions. The only way to be sure that you are delivering the proper solution is to mix it yourself and use a pump action sprayer.

When you’re finished, clean yourself and the sprayer thoroughly.

If after a couple applications no improvement is apparent, you might try a slightly stronger pesticide. But if after repeated attempts you are unable to control the situation, you should consider giving up on this plant.

The alternative is to keep trying different, or stronger, chemicals in the hope of finding the cure. Sometimes plants die, and we just have to accept it.

Integrated Pest Management works best when you look at your garden as small ecosystem. After the planting is completed, your job is merely to help nature maintain a healthy balance. And often that is best done by leaving things to nature.