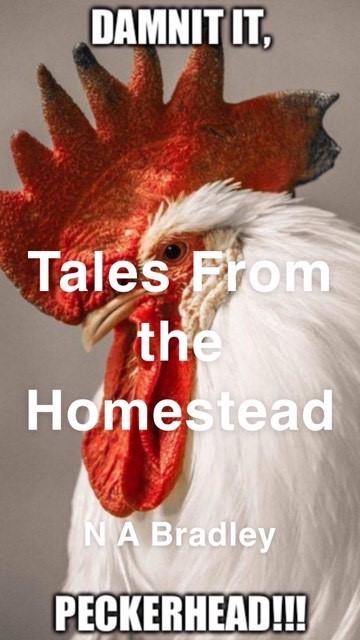 This morning, my usual circus and pony show with the poop patrol, feeding critters, carrying pails of water….then finally able to sit with my second cup of coffee on the front porch and starting to really zen out…sun is rising through the clouds, barnyard is quiet.

I hear this horrendous screeching from out behind the goatee barn…so dropping my cup, I go running. Betty White is pacing and squawking…and I’m thinking an attack from the woods…something is screwing with Peckerhead….but hell no! I come upon him tangled in wire from some fencing I stored behind the barn…and tangled good….

He looks at me with his beady little pterodactyl eyes, hissing and growling as I move closer…and see that he’s stuck tighter than a square peg in a round hole….and I also know, freeing him isn’t going to be pretty…one of his legs is wound tight in thin wire…

So wading in, I watch for the beak, the wings and the one good leg that is free….Betty White is behind me trying to protect her man and darting at my legs…I’m kicking at her while trying to get one hand wrapped around the wrangly roosters face so he doesn’t bite me…he’s flipping his stuff, flapping his wings and beating on my arms while hissing, growling and trying to peck my hands….all the while launching his body at me even though the wire is about severing his leg…and of course this wire is on the other side of a brush pile that I have to climb through, scratching my legs bloody from branches and sticks…

Finally I cut him loose…and that little fluffy flucker comes balls to the wall screeching after me…
Well that’s a fine howdy do! I save his miserable little life and that’s the thank you I get?

Dodging his attack I run for the front porch…where he proceeds to chase me and I end up throwing a full cup of coffee at him, mug and all! My dog, Tara-belle is on the porch and she scrambles as the battle ensues….and about knocks my ass down the stairs as she’s trying to high tail it out of the danger zone…I’m scrambling not to lose my footing as I send him careening off of the porch at the end of my booted foot….

Shaking my head, I retreat into the house…and watch him through the window….he won this fight because honestly I’m just too dang tired to fight this battle this early in the morning…cup of coffee in hand, I park my butt on the couch…sigh…some mornings are just plain harder than others….bwahahahahhahahahhahhha