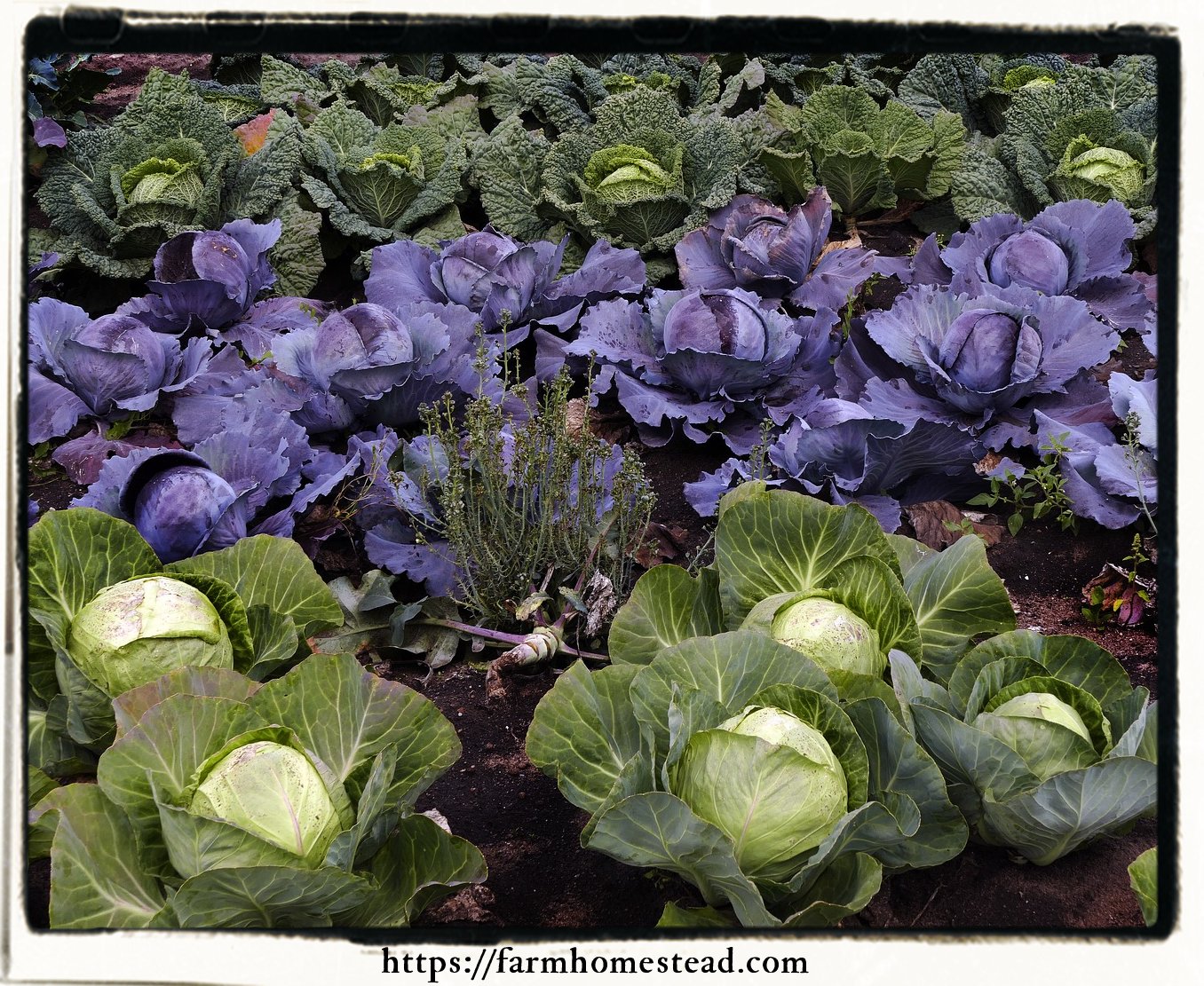 Cabbage and kale are among the hardiest and most nutritious vegetables a home gardener can grow with ease. Both are handsome in the garden, with colors ranging from pale green through dark battleship blue, to deep reddish purple. Flavors range from mild to strong, and both lend themselves to dishes both raw and cooked. The history of cabbage and kale is as flavorful as the vegetable!

A History of Cabbage and Kale
Cabbages, with their leaves formed into heads, are more sophisticated than kales. Greek and Roman colonists brought cabbages to the Black Sea region; Slavs were growing cabbages in the 9th century. Soon cabbages worked their way north into Russia. Within several centuries, Russian princes paid tribute with garden plots planted with kapusta (as they called cabbage) in addition to gifts of racing horses and jewels.

The Celts of central and western Europe were influential in making cabbage a popular food plant. The first written record of “white” cabbage (hard-heading) was by Albert of Cologne in the 13th century. In 14th century England, the distinction was made between heading and non-heading kale or coleworts, as they were then called, but it wasn’t until a century later that descriptions of hard-heading cabbages were made in Europe. The English grew loose heading, crumpled-leaf Chou de Savoys (named for the Italian province) in the 1500s. The first record of “red” cabbage in England was in 1570. 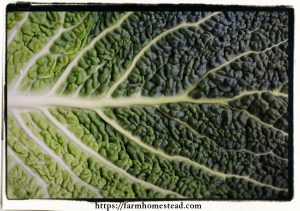 Savoy cabbages are shaped like green cabbages, but the leaves are deep green and deeply crinkled. Their flavor is mild and earthy, and the leaves are tender even when raw. Heads should be compact and tight, but will have a little more give to them because of their wrinkled leaves. See the close up of a savoy cabbage leaf… click the photo to see it more closely.

On his third voyage in 1542, Jacques Cartier planted cabbage in Canada. Because of its popularity in Europe, it is believed that early colonists grew cabbage in the United States; however, the first written record was not until 1669. By the 1700s, both the colonists and Native Americans were growing cabbage.

Chinese cabbage has been cultivated and grown in Asia from earliest times, although it is not mentioned in Chinese literature until the 5th century. It was introduced from China to Japan in the 1860s; in the 1880s and 1890s immigrant laborers brought it to America.

Kales, with their loose leaves, are the most primitive members of the cabbage family. Their origins are in the eastern Mediterranean area and Asia Minor. Kales have been food crops since about 2000 B.C. In 350 B.C., Theophrastus described a savoyed form of kale. In Europe, kale was the most common green vegetable until the end of the Middle Ages. The first mention of kale (colewort) in America was in 1669; but because of its popularity in European gardens it was probably introduced earlier. Russian kale was brought to Canada (and
then the U.S.) by Russian traders in the 19th century. 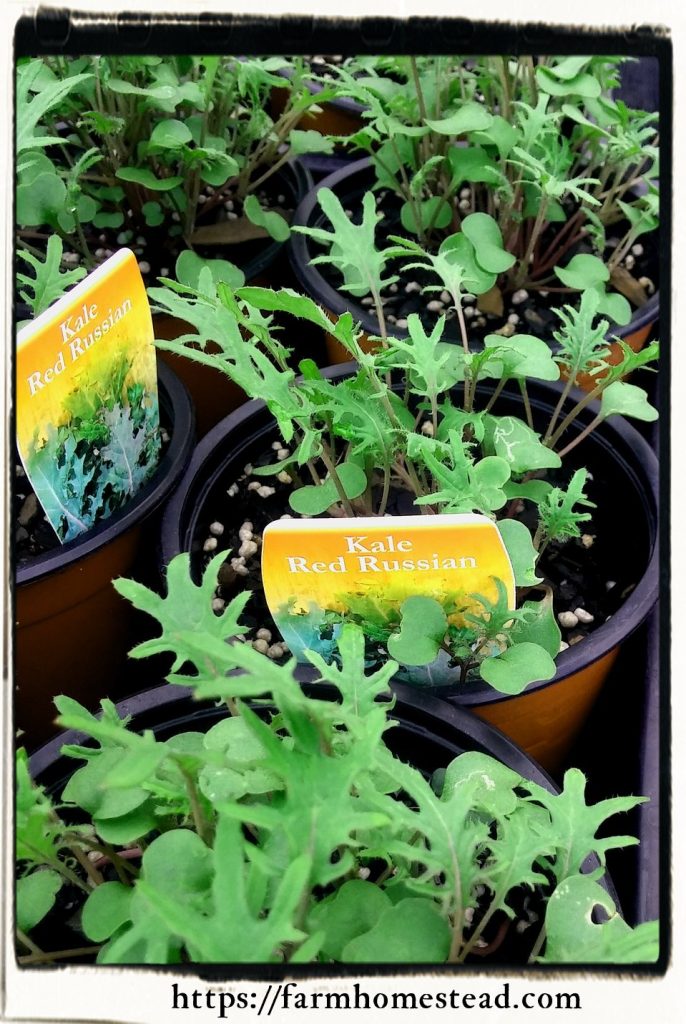 Celtic knowledge of cabbage was so ancient as to have influenced the Latin name, Brassica (from the Celtic word bresic,meaning “cabbage”). “Cabbage” is an Anglicized version of the French caboche, which means “head.” The term has been used to refer to loose—and even non-heading forms of Brassica oleracea as well as to the modern hard-heading cabbage, classified as B. oleracea Capitata group. Kale is Brassica oleracea Acephala group (Acephala meaning non-heading). Chinese cabbage is more closely related to mustard than cabbage, as its botanic name reveals: Brassica campestris, Pekinensis group. They are all members of the cabbage family Brassicaceae (formerly the mustard family Cruciferae).

The most common cabbages, Capitata or head-shaped group, are generally classified as one of three leaf and color types: green-leaved, which has smooth green leaves; red, with smooth reddish-purple leaves; and Savoy, with crinkled leaves. Within these three groups, the choices break down to head shape (round, conical or cone shaped, globe, or flat round), and harvest time (early, mid-season, or late). In all, the outer—usually darker—leaves are called wrapper leaves. Flat-headed cabbages are best for stuffing. Large, late cabbages are most flavorful and best for sauerkraut.

Kale is a Scottish word derived from coles (Greek) or caulis (Roman), terms that refer to the whole cabbage-like group of plants. The German word kohl has the same origin. Sometimes called borecole, kale can grow in northern climates—often well into winter.

In summer, as the weather warms up, the flavor of spring planted kale becomes more intense—almost bitter. Kale actually tastes sweeter and tastier after being exposed to a light frost. Tender kale greens can provide an intense addition to salads, particularly when combined with other such strongly flavored ingredients such as
dry roasted peanuts, tamari-roasted almonds, or red pepper flakes. Kales noted as “baby” and “mature” can be used raw when young and cooked when they mature. 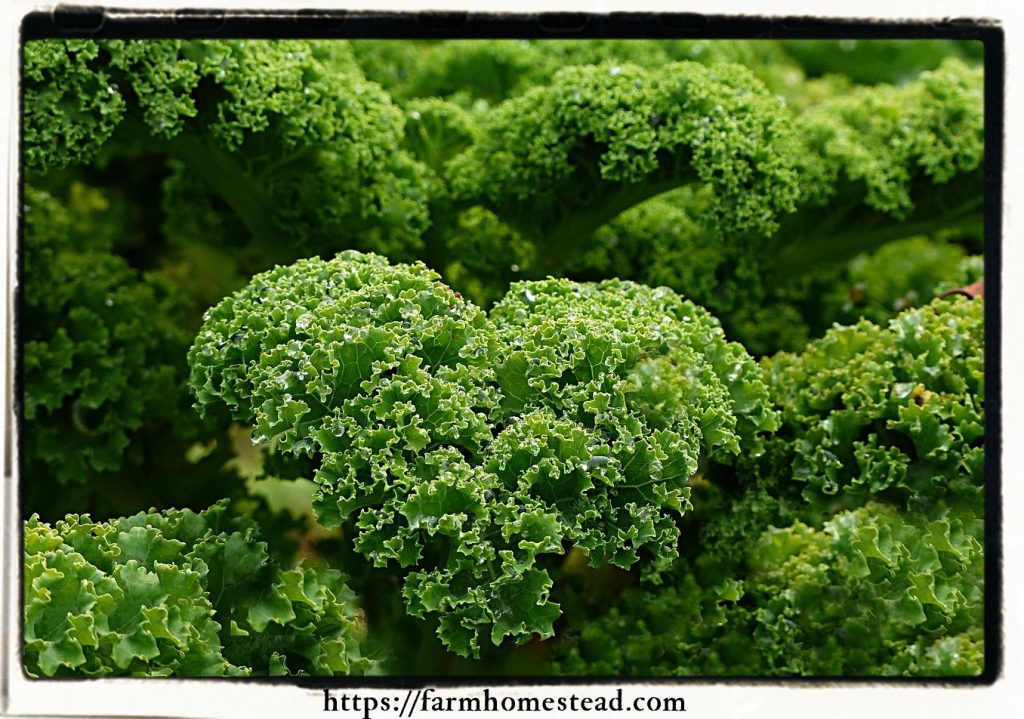 Although kale varies in color from pale yellowish to deep green through deep steely blue to purplish red and almost black, it is usually classified by the leaf form and texture—Scotch types have very curled and wrinkled leaves, Siberian (or Russian) types are almost flat with finely divided edges, while heirloom ‘Lacinato’
is in a class of its own. Blue-green color is associated with greater cold tolerance. Japanese kale is primarily used for decorative or ornamental purposes.

Why the fuss over classification and plant names?

See the article, Plant Names to find out why it is so important!