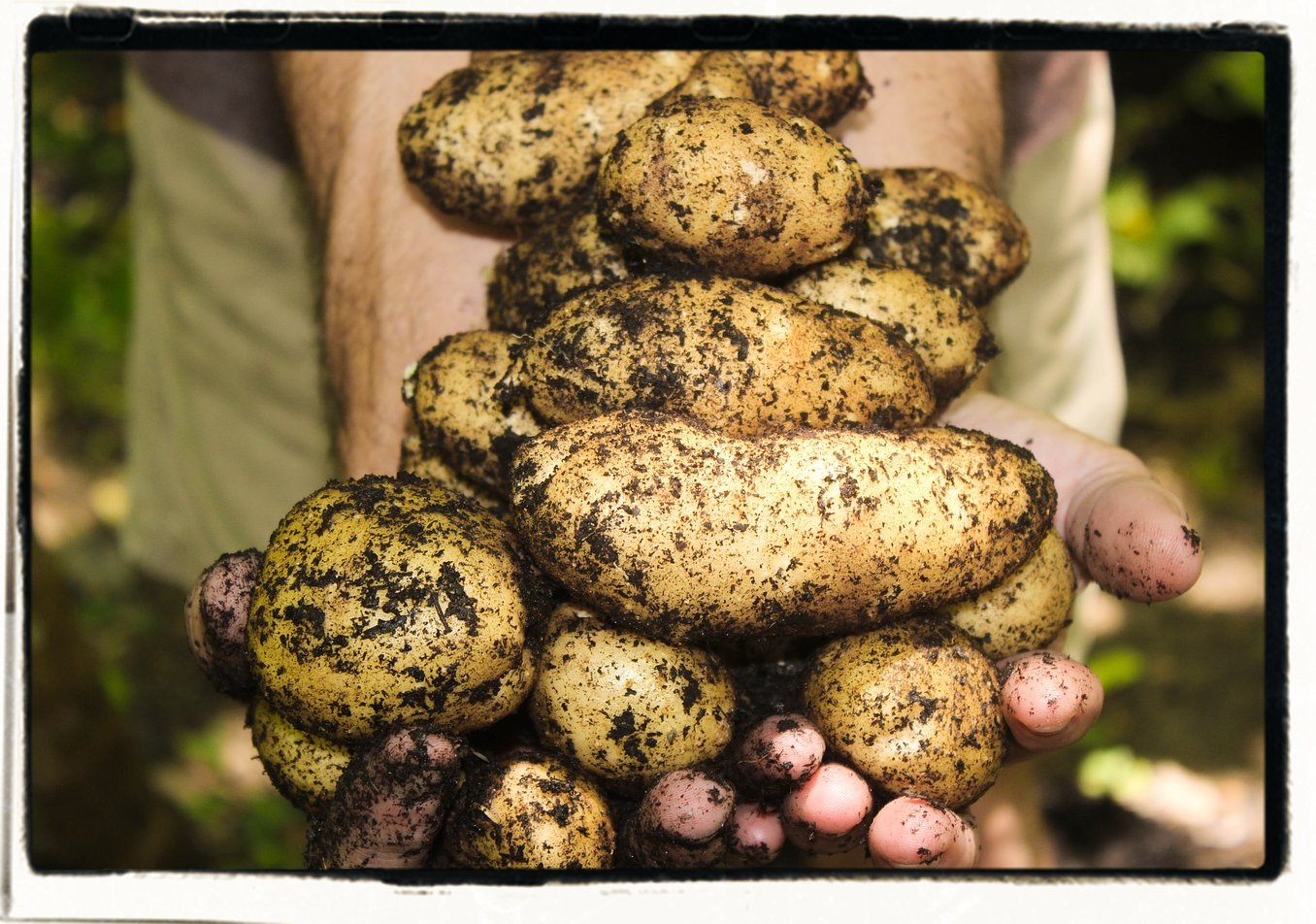 I read somewhere that people get so dogmatic about the way they grow their potatoes because basically you can’t screw it up. Plant potatoes, water potatoes, harvest potatoes.

I have grown potatoes many times in up to four tires high. I have had great success. I have had lousy years. The one real common denominator in bad potatoes is water…. too much, not enough. Potatoes like consistent water, moist soil. Irrigate to assure uniform moisture while the tubers are developing. A uniform moisture supply also helps to cool the ground and eliminate knobs caused by secondary growth. Drowning them with water, letting them dry out and repeating this through the potato’s growing season is a recipe for growing scabby, knobby potatos.

Is it safe to grow potatoes in tires?

While, if you are responsible for getting rid of heaps of tires, it may seem like a viable idea (planting potatoes in tires) for the truly organic, the idea just doesn’t “sound right”. My husband and I have talked about it often. “Oh yeah” I’d say, “My daddy grew hundreds of pounds of potatoes in old tires!” “Let’s do it” he’d say, “I’ll find some” In fact he brought me two just yesterday. So here I am, doing the research to write this article and I find myself once again contemplating the idea of growing potatoes in tires, once and for all. I’m not sure why, but I’d like to put the concept to rest and move on. This is a personal choice and below are some well reasoned thoughts on growing tire potatoes…

Short-term, yes, tire planters are OK, although the soil in black tire planters will probably get hotter than most plants would prefer. Long-term, no, because the tire rubber will slowly biodegrade and release zinc, carcinogenic PAHs (polycyclic aromatic hydrocarbons) and other toxic compounds into your soil. [1]

“There is no appreciable risk in using recycled tires in the vegetable garden. While it is a fact that rubber tires do contain minute amounts of certain heavy metals, the compounds are tightly bonded within the actual rubber compound and do not leach into the soil. One of the ingredients in the rubber recipe is zinc. Zinc, in fact, is an essential plant element. I also expect that rubber is safer to use than treated lumber that contains copper and arsenic. Tires are durable. The very qualities that make them an environmental headache make them perfect for our uses in the garden. Once they are in place, they won’t rot and will likely be there for your grandchildren to use.” [2]

Ash from burned tires is a toxic material and barren soils have resulted where huge piles of tires burned. In other words, nothing will grow where tires have been burned. As far as unburned tires, the only potentially toxic metal in tires is zinc. Studies which show soil toxicity resulting from exposure to tires are based on using rubber mulch (i.e. shredded tires) – which radically exposes the zinc to leaching. As far as planting in whole tires, or in tires with the sidewalls cut out, there is no evidence I can find that indicates zinc leaching from whole, unshredded tires into soil. [3]

“PLEASE DON’T USE TIRES. could be very dangerous to your health. I asked my tire merchant about this and he said the amount of chemical materials the tires collect off the roads over their lifetime seeps into the tire rubber and will leach out into your potato crop as the insides become damp with watering. It’s a good idea BUT for your own health, please stop and think of all the chemicals that go into tar production. Do you really want this in your potato crop? And before you ask, i did use this method…but now I use the method described above with the boards or with large containers. Sorry to be a scare monger…but it’s your health [4]

So how to grow potatoes in Potato Towers, if not Tires? 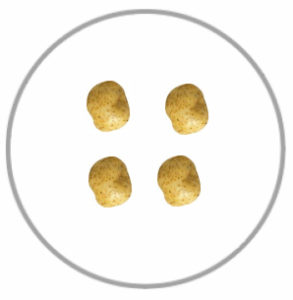 I used 2×4 welded wire (tall as you like, I used the 48″ height) You can use chicken wire too, anything will work. I created a ring 3 foot in diameter (ish) doesn’t have to be exact. And used a short T-Post to hold it in place with a bit of wire.

On the bottom I used newspaper and old boxes (flattened out) to kill the Bermuda so full and thick right where I wanted the potato bins to be. I filled the bin to the full with straw, leaves, grass clipping, whatever I could could collect to get them full. I started that in the fall. I watered it from time to time. By the time spring came, the planting material had composted down to the height I wanted to plant, around 10″ from the bottom.

We have a tradition in our family to plant potatoes on St. Patrick’s Day, but I think I went more by the weather and planted the potato pieces on March 13. I just dug down and moved the compost over and placed four potatoes in a circle around the middle. I covered them up with four inches of compost. I watered them in good. The compost material holds the water really well until it gets very hot and depending on how much direct sun the towers receive. 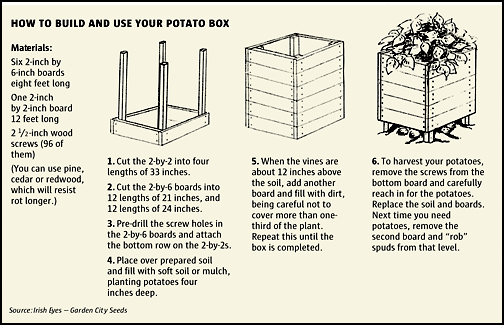 The image above [5] is from the Seattle Times whose article was based on Greg’s directions at Irish-Eyes Garden City Seeds.

And someone tried it, you can see their first year results and took great photos!
Build-As-You-Grow Potato Bins