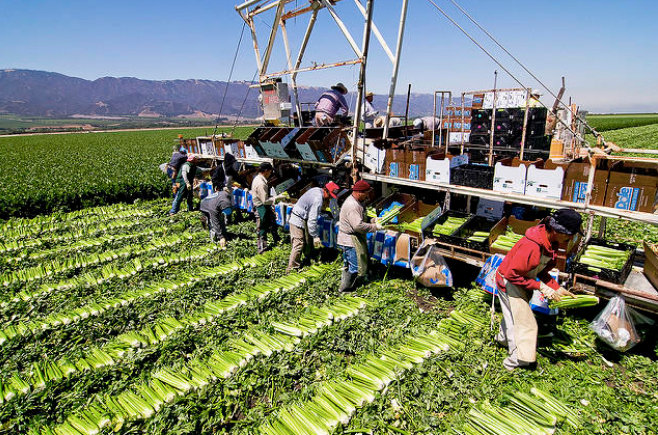 I thought this article was worth a mention. It is a problem that is growing without much support or solution in sight. There has to be a way to We support Local Harvest by using their online store to sell our botanicals. Please use the LocalHarvest search engine to find local farmers, farmer’s markets, CSA’s and real local food.

Let’s talk frankly about the state of agricultural labor in this country. Don’t worry, the US is not alone in this dilemma- it is happening in countries all over the world. Despite a growing human population, we have fewer people who want to be farmworkers. And those that do want to do the work may not be located in the countries that need the workers. It is a mismatch of global proportions because we don’t let labor move freely around the world.

There has been a long-term decline in the number of people employed in agriculture in the United States. This includes principal operators, their family, and non-family paid labor. This is not a new trend, but it is a complex one. Increasing mechanization can account for the vast majority of labor declines (USDA ERS Farm Labor website). But there are numerous sectors of agriculture that still require the skilled knowledge and dexterity of humans, and thus far, the robots and machines are just not cutting it. This includes most fruits, vegetables, dairy, and livestock and poultry production. These are precisely the kinds of diverse crops you may see on small and mid-scale family farmers around this country, and the same kind that you will find when using the LocalHarvest search engine.

The decline in the number of people working in agriculture is not due to a reduction in demand for their services. Indeed, there is a growing and acute shortage of agricultural workers in most parts of the country. The causes of this decline of available workers and the implications this had for US agriculture is extremely complex. But I think it is worth understanding. With all the heated opinions and vitriol being passed around regarding foreign-born workers, it really helps to understand some of the nuance.

US agricultural workers are comprised of US citizens and immigrants from many parts of the world, around 2.5 million people in total. One quarter are US born and the rest are from other countries. Most have the legal right to work in the US, but in some agricultural sectors such as specialty crops, an estimated 50-70% of the employees are thought to not have the proper legal documentation to work here (NAWS 2016). Yet, the only legal visa program for agricultural workers (H2A), provided work permits for a paltry 200,000 people in 2017. It is expected to double to 400,000 in 2018. Clearly, though, there is a significant mismatch between a need for millions of people and only allowing 400K people in legally to do the work. In addition, the H2A program is only for seasonal work, and many farms such as dairies and poultry farms, may operate year-round.

Less people are immigrating to the US for agricultural work. Fifty-five percent of agricultural workers have been in the US for at least 15 years. They are skilled and proficient at the work they do and many are rooted and embedded in their communities. Eighty percent of farmworkers are settled now and non-migratory. The days of following crops all over the country are over. It is not a sustainable lifestyle for most. Farmworker immigration to the US is down due to the after affects of the 2008 Great Recession, increased mechanization, and improving economic conditions in Mexico where the bulk of agricultural workers for the last 70 plus years have emigrated from. More recently, increased deportations and fear of movement have curtailed worker immigration as well.

With the strengthening job market of the last 5 years, many farmworkers have moved into more lucrative work in landscaping, construction, food service and processing (NPR Morning Edition 5.3.18). Despite wages going up in agriculture to an average of $12.47/hour in 2017, finding and retaining employees is really tough. The NPR radio show described a California celery farmer who was now paying over $20/hour but still struggling to get enough workers to harvest the crop. As a result, he has shifted to less labor-intensive crops and is moving production down to Mexico. Same workers, different country. What will become of the US farmland when it is fallowed and the intensive production shifts out of country? A 2017 survey conducted by the California Farm Bureau demonstrated that nearly 20% of surveyed farmers/ranchers were going to fallow land or simply not harvest the crops due to labor shortages. Fallow land can become a hotbed for invasive weeds, or be sold off for development because it is not bringing in farm income. Not many people can hold onto unproductive land.

Where is the domestic workforce? Quite simply, they are not applying for jobs in agriculture in any appreciable numbers. One factor is that 1 out of every 5 American men ages 25-54 have some sort of drug addiction (mostly opoids) that keeps them out of the workforce. Ten percent of young American men ages 21-30 are completely idle- meaning not choosing to work nor to further their education. So that’s about 30% of the able bodied male workforce that are not going to be applying for agricultural jobs. The rest are either furthering their education or working in other careers, caring for family members, or disabled (see this 2017 Brookings Paper on Economic Activity called “Where have all the workers gone?” for this data). Nobody should delude themselves into thinking that American-born people are going to fill the need for millions of farmworkers each year. Even with increasing wages, better benefits, shorter work days, and other structural changes, the farms and ranches of this country require access to a certain amount of motivated immigrant workers in order to stay viable and thrive.

Farmers and ranchers have chosen to cope in a number of ways. Raising wages has been their first strategy, but they are working with labor contractors to find employees, increasing mechanization to the extent they can afford to, switching to less labor intensive crops (meaning less production of fruits and vegetables), reducing acreage, changing cultural practices, and simply not harvesting crops. If we worry about food waste, this last statistic of nearly 9% not harvesting crops and letting them rot on the tree, vine, or in the field is a really unfortunate situation (California Farm Bureau Federation 2017).

I will return to a premise I made in an earlier Local Harvest article I wrote. That we need a safe and sane immigrant agricultural worker program. It must ensure human rights, it must not be exploitative, and it needs to respond to the realities of diverse agricultural systems. It must not be used as a crutch to prevent living wages in agriculture nor to use people like indebted servants. Likewise, we need an end to the hateful scapegoating of hard-working people who want to work, regardless of their nationality. I hope you will join me in advocating for these things.