Okay. It’s a really pretty beetle. (Click on it and look at it up close if you don’t believe me) Even if you don’t really like bugs, if you leave that part out, and really look at it with open eyes, it is really colorful and quite perfect.

It is sort of like a little baby bunny rabbit. It’s just cute. But the damage it has done to the world’s food supply is, simply put, inestimable; unable to be estimated or assessed. Why? Because of their great ability to reproduce? 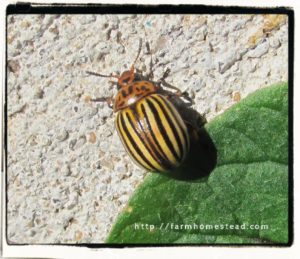 But according to the sources cited in the article, Colorado Potato Beetle …

An important thing to keep in mind is that Colorado potato beetle has a legendary ability to develop resistance to a wide range of pesticides used for its control. High predisposition to resistance development seems to be an inherent characteristic of this species. It is probably caused, in large part, by the coevolution of the beetle and its host plants in the family Solanaceae, which have high concentrations of toxins, namely glycoalkaloids.

Think about that for a minute. How many different insecticides have been developed in response to that resistance? It is still resistant to a wide range of insecticides, including the arsenicals, organochlorines, carbamates, organophosphates, and pyrethroids. I wonder how many poisons are being poured out by desperate home gardeners to save their winter food without knowing that the potato beetle will simply scoff? The product doesn’t have to have a warning that says, “Caution, potato beetle is resistant to this poison, but honey bees are still affected.” It doesn’t have to say, “Will kill the lady bugs that eat the potato bugs’ eggs”.

Hmmph. What’s wrong with this picture?

1 thought on “Pesticides for Potato Beetles”