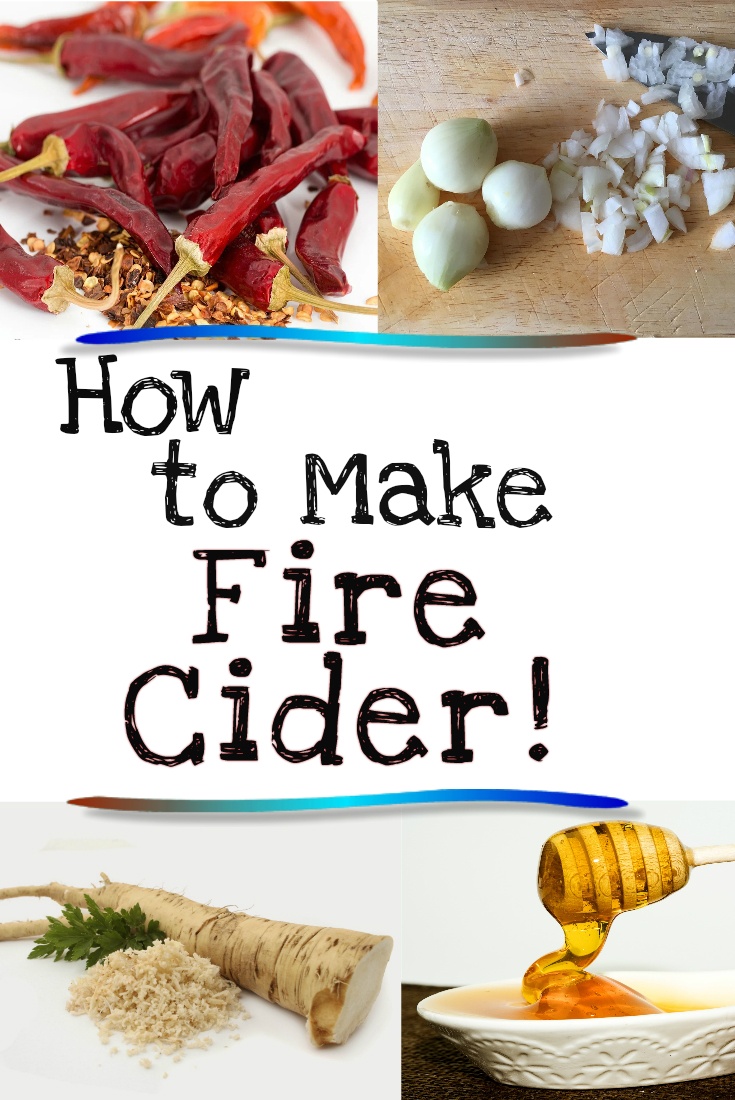 Fire cider is one medicinal herbal tonic (of many!) that can be made easily in anyone’s kitchen using some of nature’s most powerful ingredients; creating one of the most effective herbal remedies that the whole family can reap amazing health benefits from. Want to know how to make fire cider?

Have you heard of fire cider? The first time I ran into this traditional folk recipe, I have to admit I was scared to death to try it. Hot peppers, horseradish, garlic, onion, and ginger infused in vinegar? And I am supposed to drink that? This was one of the first recipes I made in my formal herbal studies. It sat in my fridge for two years before I tried it, but when I did, I was hooked. It is just so worth it! Never mind you can use fire cider in so many MANY ways — from lung cleanser to cooking to cocktails.

This post is for Sherry McDaniels, who I met in the grocery store in my little bitty home town of Chelsea, Oklahoma. She asked me if what I had there was ginger root.

Somehow we got started talking about what to do with it. I spoke about Fire Cider. I gave her my business card. I told her to come to FarmHomestead.com and there was a recipe. (OOPs!) Then I realized that with all my writing, I’d never posted an article on Fire Cider or how to make it. I did post an article about cooking with fire cider, but not the actual recipe. So Sherry, here it is. 🙂 And thanks for the motivation!

What IS Fire Cider?

Well, let me quote Rosemary Gladstar (I will be doing that a lot)

Some apple cider vinegar recipes have been around for centuries. Four Thieves Vinegar (page 104 of the book Fired Cider!) and the Queen of Hungary’s Water (page 124), for example have been popular recipes for more than five hundred years, and even today they are made and sold around the world. Some formulations, like Dr. Jarvis’ famous apple cider vinegar and honey tonic and Dr. John Christopher’s apple cider vinegar and cayenne tincture, became popular in the alternative healing community of the 1960’s when drinking cider vinegar with as much cayenne as you could tolerate, with or without honey, was deemed the healthy thing to do.

And then there was fire cider… Who would have ever have thought that a simple vinegar recipe made with common kitchen ingredients would become as popular as it has – or as controversial? It certainly never crossed my mind that day, oh so long ago, when my students and I were in the kitchen chopping garlic, onions, horseradish, and ginger, and we ended up adding all to a jar of apple cider vinegar. [1]

So, fire cider is a vinegar recipe. Like a shrub or an oxymel… Wait, let me digress so you’ll understand the terms…

Oxymel – the oldest of the drinks found in Medieval Persia is a syrup of honey, vinegar and herbs.

Speaking of oxymels, as Stephen Harrod Buhner states in his book, Herbal Antibiotics, they “have been used for thousands of years. The basic form is 40 ounces of honey to which is added 5 fluid ounces of water and 5 fluid ounces of vinegar.” Buhner knows a thing or two about herbs and alternative medicine. He has written 23 books, and scores of magazine articles. I own many of his books and I can’t recommend them enough.

Shrub – derived from the Arabic word sharab, means drink, is a zingy mixture of fruit, sugar and vinegar.

Switchel – swizzle or haymakers punch, was commonly served to farm hands during the harvesting of hay. Molasses, ginger and vinegar were the usual combinations.

What is Fire Cider Good For?

Well, where to start? Let me make a list off the top of my head and then I will fill in the blanks.

If you are one of those people who gets sick a lot and you feel that you have weak immune system and trying to find a way to jump start it then FIRE CIDER! is one the most effective natural tonic around.

If you’re into high spice, you will probably take to fire cider quickly. If you go “Ewww!” every time someone even mentions the word spicy, you may want to start out simply using in soups, stews, and other saucy food. You can even mix it with oil and make a nice dressing for salad. You can scale back on the peppers and use more honey to make it sweeter. (yes, you’ll still get the health benefits)

What is the best apple cider vinegar to use?

My answer? Homemade! I DO have a post about how to make your own apple cider vinegar. It’s not hard at ALL. But if you are itching to make fire cider and don’t want to wait for it, then I totally recommend Bragg’s. It is rich in enzymes and minerals and is certified organic, unfiltered, and unpasteurized. It contains the “mother” and is the true best you can buy.

When and how to take fire cider

The wonderful thing about fire cider is considered a remedy and tonic at the same time. If you are feeling you are getting the cold or flu, it has been advised to take 1 tablespoon 3 times a day.

As a tonic, you can take 1 tablespoon daily to boost your immune system and to prevent you from getting sick.

For people who don’t like hot and spicy, you can add more honey. That should balance the spiciness.

Is there any science to backup fire cider benefits?

You might have some luck looking into the individual ingredients (many of which have been folk medicine mainstays for years).

Ever heard the 4 Thieves Vinegar story? Could this have inspired the making of fire cider? See this article, Bubonic plague – natural strategies for resistant strains.

Professional herbalists back the elixir’s immune-boosting capabilities. Dorene Petersen, president of the American College of Healthcare Sciences in Portland, Oregon, who also has a diploma in Natural Therapeutics and special training in Chinese medicine, notes that Fire Cider is made from nutritional powerhouses—horseradish in particular. “It’s an incredibly powerful botanical,”she says. “It has antibacterial potential; it’s great for things like the bacteria that cause things like acute sinusitis.”

Petersen speaks of the other ingredients’ impressive qualities: garlic is an antioxidant and can help regulate blood pressure, turmeric has anti-inflammatory properties, and ginger has warming abilities. The sum of these parts is hard to beat. “It’s a mild tranquilizer and it’s an anti-inflammatory, so it’s really very powerful,” Petersen says.

And that’s before taking into account the star of the show, apple cider vinegar, the rest of the other Fire Cider ingredients steep in. Petersen points out that a number of studies have shown that ACV (apple cider vinegar) can help to stabilize blood sugar levels and lower cholesterol. She even suggests keeping a bottle on hand to help with the overly full feeling you get after a big meal (yes! buh bye, bloating!). [3]

Is fire cider hard to take?

I know it may sound terrifying. I told you that was my first impression. But here are some serving suggestions. [2]

Annaliese Griffin at Well and Good [3] described the flavor as “somewhere between pickle juice and kombucha — but when you take a straight shot of it, the peculiar fire of horseradish shoots up your nose while, at the same time, the capsicum heat from the habaneros spreads down your throat. I know it sounds terrible (and terrifying), but the burn is quick—you’re not going to walk around with your mouth on fire all day.”

Fire cider was first introduced in the 60’s by Rosemary Gladstar [1], a well-known herbalist that taught her students and the community this amazing recipe to aid in the repetitive colds, chronic coughs, respiratory issues, and seasonal depression that so many were suffering around her school at that time, The California School of Herbal Studies. Rosemary says,

The task was to create a remedy using common, readily available kitchen ingredients that could be taken as a daily tonic to warm and energize the body, raise immunity, and aid in circulation.

Her mission has been to build a bridge between medicinal herbalism and your kitchen pantry. If you are interested that herbalism and herbal remedies NOT be trademarked, do read their journey at Free Fire Cider. (They won, by the way.)

If you already use Fire Cider or would like to find more ways to make it, different recipes abound. Rosemary Gladstar (again!) wrote the book on it. 🙂

Some recipes in the Fire Cider! book…

And so many, many more! In fact, 101 Zesty recipes for health-boosting remedies made with Apple Cider Vinegar. (which is her subtitle for the book by Rosemary Gladstar and Friends). 🙂

Now are you motivated to make your own fire cider? Let me know how it goes! Send photos and I will post them (if you don’t mind) to this page so everyone can benefit from seeing how you did it!

I really hope you found helpful information here… enough to inspire you to enjoy creating your own fire cider based on what you like and the ingredients you have available to you. Truth be told, I’ve made at least nine of the recipes from the book and like any good herbalist 😉 it is a little different every time. In some batches I have employed other immune building herbs (like echinacea and elderberry or yummy spices like parsley, thyme, or oregano. You can also add fruit or vitamin C-rich rose hips. I have also used fried chilis from the garden, including serrano, jalapenos, and habanero.

“God is trying to make vinegar. It is the winemaker’s job to stay his hand.”
~ August Sebatiani Winemaker
To which Rosemary Gladstar replies..
“And I say, “Let God Have His Way’ “

Note: As with any health concern you should, of course, listen to your own body and the advice of your health practitioner. If you are curious about the research associated with some of these ingredients, check out the University of Maryland Medical Center’s guides to garlic, ginger, and cayenne/capsaicin.

1 thought on “How to Make Fire Cider”