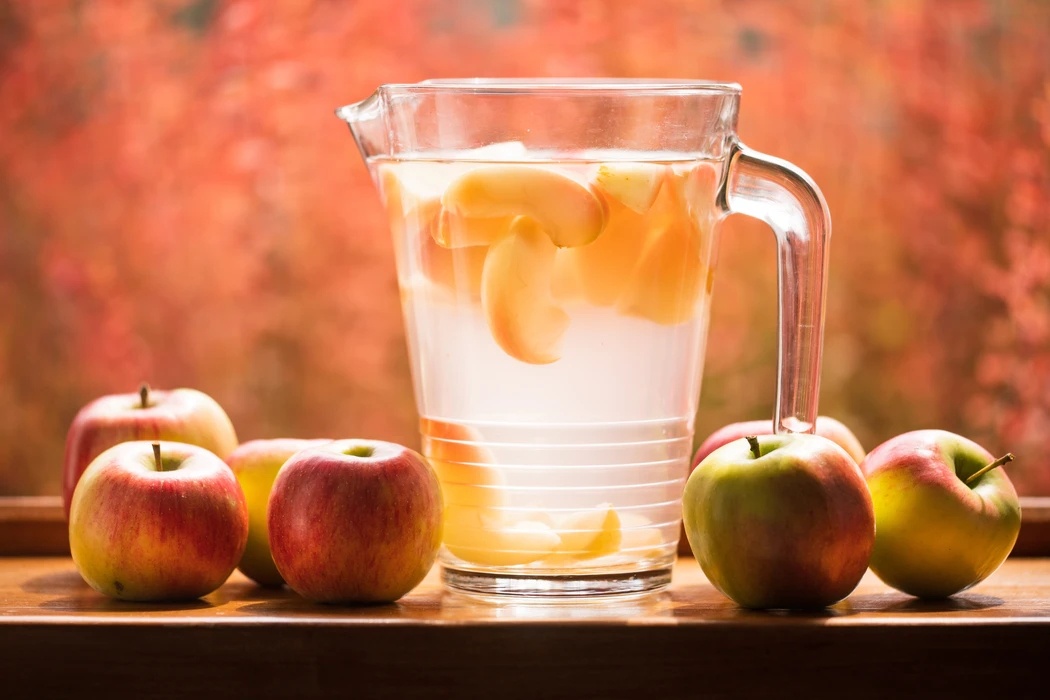 Once you give this recipe a try, you will be making homemade apple cider vinegar all the time. You won’t have to buy it ever again. Never mind the pride you will feel when you are sipping on your own homemade stuff!

It’s really no big secret that us homestead folks are always going on about how to use up scraps for everything under the sun … from chicken food to animal care to making compost. And, while you may not be aware, apple cider vinegar is just so VERY good for you!

Have you ever wondered why it is called Apple CIDER Vinegar? I mean, why not simply Apple Vinegar?

I am just naturally super curious and it really just stuck in my head, apple CIDER vinegar.

Here is a super helpful tutorial from the National Center for Home Food Preservation on how to make your own apple cider which is interesting all by itself, but at the bottom of the tutorial, they show you how to make apple cider vinegar from the APPLE CIDER.

How cool is THAT?

This is one of the easiest DIY projects ever! You’ll wonder why you never tried it before.

So how do you get started making Apple Cider Vinegar? To begin with, you have two options.

Do I Need to Use Organic Apples to Make Vinegar?

Now for the recipe…

Related  What To Store In A Root Cellar

That’s it. Viola! I told you it was easy! Oh! One last thing…

Caution: Homemade vinegars should not be used for home canned pickled foods. It will not have the same carefully controlled acidity as store bought vinegars.

And since we’re on caution mode, let me mention a few things you’ll want to make sure you get right to avoid a stinky mess later… (ask me how I know 😉 )

Use sanitized utensils and containers

It is easy to add unwanted bacteria to your homemade apple cider vinegar. This will result in mold and other undesirables. Be sure to wash your hands as you go!

Vinegars (fermentations in general) react badly to metal. They can also leach chemicals and impart a really awful taste to your finished vinegar. To prevent this, use glass jars.

If you don’t have access to your own filtered water then put as much as you intend to use in a pitcher or bowl over night. Chlorine is a gas and will “gas out” of the water if left out. Also, chlorine kills the many microbes that create the vinegar. Chlorinated water = Bad. (if you’d LIKE to have access, see Berkey water filter best one I’ve ever used.)

To turn apple cider into vinegar you simply allow apple cider to ferment past the stages of sweet cider and dry cider until it becomes vinegar. Again, this is referring to the previous recipe on their white paper, Making Apple Cider.

Pour the strained, fresh apple juice into a clean crock, dark-colored glass jar or jug. (Be sure to leave 25 percent of the container empty to allow for foaming during fermentation.)

Cover the container with something that will keep dust and insects out but will let air in, such as a triple layer of cheesecloth, or clean tea towel. Stretch the material over the top of the jar and tie it tightly with a string.

Store the juice in a cool, dark place, like an unheated basement or garage. Fermentation will take from 4 to 6 months. After 4 months, remove the cover and taste the vinegar. If it is strong enough, strain it through a triple layer of cheesecloth. Then heat the vinegar to 170°F and hold it at that temperature for 10 minutes.

Pour into bottles and seal with caps or lids. If the vinegar is too weak, after the first 4 months, test it every week until desired flavor is derived. While vinegar is fermenting, a jelly-like layer forms on top that is called the “mother of vinegar.” The mother is trapped and removed during straining. It can be carefully saved and refrigerated for use as a starter with your next batch of vinegar.Caution: Homemade vinegars should not be used for home canned pickled foods. It will not have the same carefully controlled acidity as store bought vinegars.