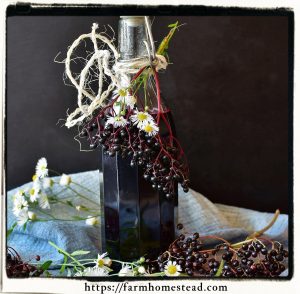 Elderberry or Sambucus is a flowering plant from the Adoxaceae family. It grows in subtropical regions and is more widespread in the Northern Hemisphere. The plant is cultivated for its ornamental leaves and flowers, but has also been a part of natural medicine for centuries.

The Latin name nigra means ‘black’, and refers to the color of the berries.[1] The English term for the tree is not believed to come from the word “old” but from the Anglo Saxon æld, meaning fire, because the hollow stems of the branches were used as bellows to blow air into a fire.[3]

Elderberry has a very well documented history of use in folk remedies. In the Middle Ages elderberry was considered a Holy Tree, capable of restoring good health, keeping good health, and as an aid to longevity. Hippocrates referred to elderberry as “nature’s medicine chest”. All parts of the elderberry plant are considered a valuable healing plant in many folk and native medicine traditions.[5,6,7,8]

Elder is used in Native American Herbalism (including internal and external applications, as well as food).This and other Sambucus species were used extensively by the Cherokee and many other tribes across North America.18]

The flowers are used externally to aid in complexion beauty, tone and soften the skin, and lighten freckles or spots. The berry juice made into salve aids burns and scalds [5]. Elderberry flowers contain flavenoids and rutin, which are known to improve immune function, particularly in combination with vitamin “C.” The flowers also contain tannins, which account for its traditional use to reduce bleeding, diarrhea, and congestion.

Elderberry is among the oldest healing plants in the world. Even science has confirmed its powerful abilities in the last few decades after a long time of ignoring it. Most of the research on elderberry has been focused on its effect on colds, the flu, cough and similar problems. Several studies have shown that elderberry extract is just as effective as Tamiflu, (the usually prescribed medication for swine flu) without the side-effects of the drug.

Elderberries have twice the Vitamin C of oranges and 3 times the anti-oxidants of blueberries. They are high in polyphenols and bioflavonoids. Use of the elderberry and elderflower is common and widespread in Europe. Modern science is now beginning a serious study of the plant’s nutritional properties and uses.

While elderberry is used in Ayurveda and TCM (Traditional Chinese Medicine) Traditional Western Herbalism is where Elder medicine has been best documented and most used. According to Mathew Wood, all parts of the Elder were used in Traditional Western Medicine, leaves, bark, and root included. [2]

Both the flowers and the berries have a long tradition of culinary use, primarily for cordials and wine. In south-western Sweden, it is traditional to make a snaps liqueur flavored with elderflower. Elder flowers are also used in liqueurs such as St.Germain, and in a mildly alcoholic sparkling elderflower ‘champagne’.

In Beerse, Belgium, a variety of Jenever called Beers Vlierke is made from the berries.

Can anyone say jelly? I don’t use much jelly or often, but when I do, this is the one I reach for first. Elderberry jelly is simply full of purpley goodness. Sometimes, I simply want to make biscuits so I can eat elderberry jelly, but I discovered that it is good with anything. It is important to use ripe berries and remove the seeds and residue. Elderberry seeds can be toxic and should be avoided.

Elder Flower water can be used as an effective skin toner. It can help lighten skin and was used to help fade unwanted freckles.

The strong-smelling foliage was used in the past, tied to a horse’s mane, to keep flies away while riding.

Elderberry twigs and fruit are employed in creating dyes for basketry. These stems are dyed a very deep black by soaking them for a week or so in a wash made from the berry stems of the elderberry (Barrows 1967). The Cahuilla split basketry materials from the aromatic sumac (Rhus trilobata). Elderberry branches were used to make the shaft of arrows. Flutes and whistles were constructed by boring holes into stems hollowed out with hot sticks.

Clapper sticks were made by splitting the stem and clapping the two halves against each other. Clapper sticks were used ceremonially in the round-house to accompany singing and dancing. The pith of the stems was used as tinder, and the stem itself was employed as a twirling stick for starting the fire. Hollowed-out elderberry stems can be made into squirt guns.

This plant is used as a medicinal plant by native peoples and herbalists.[14, 15] Stem, bark, leaves, flowers, fruits, and root extracts are used in bronchitis, cough, upper respiratory cold infections, and fever. Sambucus nigra fruits and flowers have been used in traditional Austrian medicine – internally (fruits as tea, jelly, juice, or syrup; flowers as tea or syrup) for treatment of disorders of the respiratory tract, mouth, gastrointestinal tract, and skin, and for viral infections, fever, colds, and influenza. [16] The first book about the medicinal properties of the plant was written by German physician Martin Blochwich in the 1620s.

Flowers: are antispasmodic and astringent to the gut, protecting it against irritation and inflammation. Elder is useful for heartburn, indigestion, gastritis, diarrhea, gastroenteritis, colic and wind. [9]

Berries are a rich source of anthocyanins and other phenolics and nutrients. Several species of Sambucus produce elderberries with similar chemical compositions including American Elder (Sambucus canadensis) and Blue Elder (Sambucus caerulea), but European Elder (Sambucus nigra) is the type most studied and used in supplements.

The plant’s powerful diuretic properties can ease many kidney and urinary tract problems.

According to WHO, the tincture should be prepared with 25% alcohol.

Topical Use: Infusion of the flowers is used as a wash or compress for improving oily skin or acne, or for treating injured tissues. Tincture of 3 to 5 mL diluted in 240 mL of water can be used for the same purpose. [10] There are lotion and cream formulations of the flower extracts also.

John Evelyn, writing in praise of the Elder, says:
“If the medicinal properties of its leaves, bark and berries were fully known, I cannot tell what our countryman could ail for which he might not fetch a remedy from every hedge, either for sickness, or wounds.” Maude Grieves A Modern Herbal 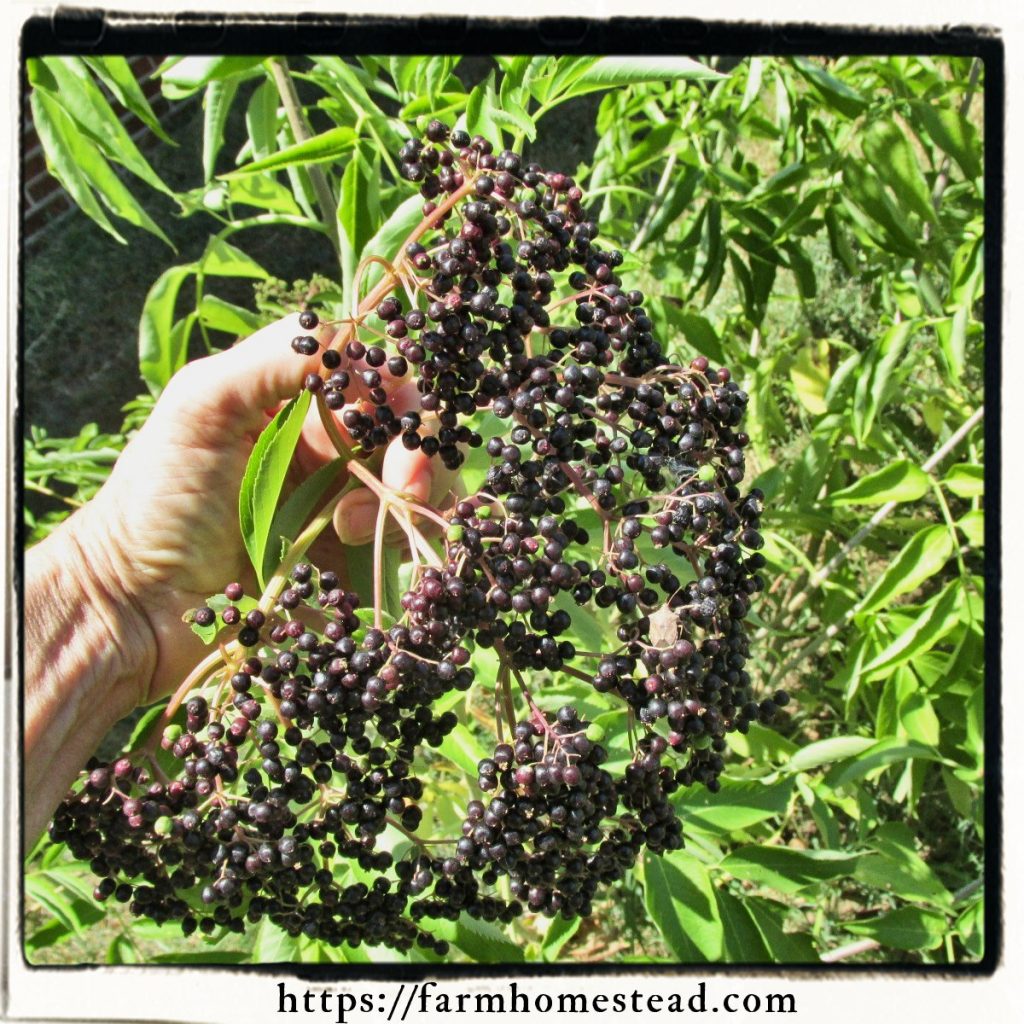 The following are links to recent elderberry research information and news:

Standardized Elderberry Syrup Shortens the Severity and Duration of Influenza in Adults
cms.herbalgram.org/herbalgram/issue63/article2702.html

Inhibition of several strains of influenza virus in vitro and reduction of symptoms by an elderberry extract (Sambucus nigra L.) during an outbreak of influenza B Panama
https://www.ncbi.nlm.nih.gov/pubmed/9395631