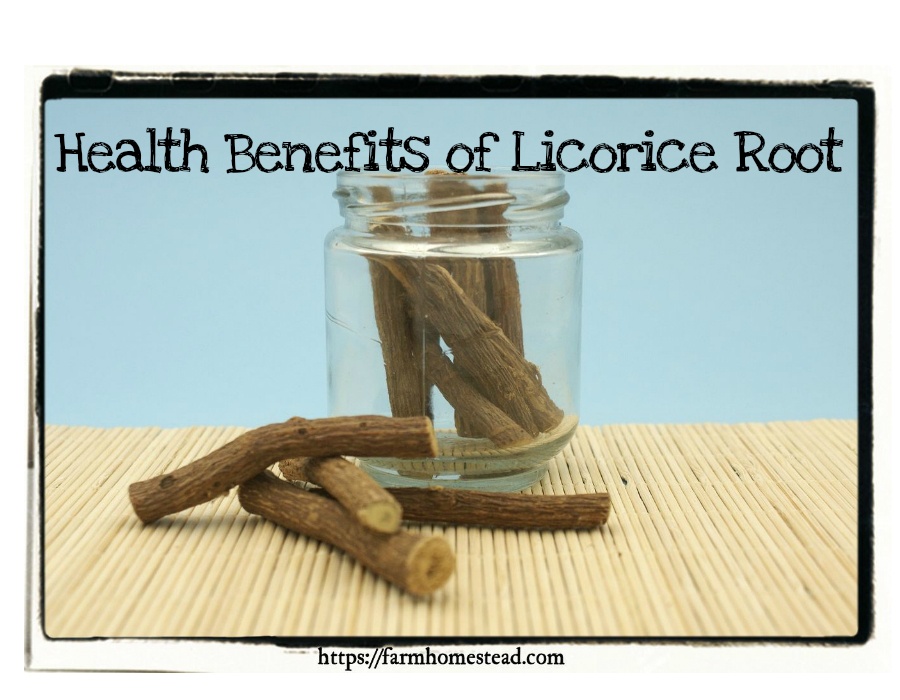 There is nothing more distinct than the taste of licorice. This flavorful candy comes in black and red. While black licorice is a love hate relationship, you may be surprised to know that it doesn’t contain any actual licorice root. Would it surprise you to know that there are health benefits to licorice root?

Whether you love the taste of licorice or not, there is no denying the health benefits of licorice root (Glycyrrhiza glabra). Licorice root has many healing properties when taken in small doses. Be careful when taking licorice to treat a medical condition, though, too much licorice can be toxic!

Licorice is a very well known herb in traditional Chinese medicine (TCM). In China, it is called “gancao” (meaning “sweet grass”) and has been recorded in the Shennong’s Classic of Materia Medica around 2100 BC. In this book, licorice was supposed to have life-enhancing properties. During the following thousands of years licorice has been present in most of Chinese traditional prescriptions. It was believed to have the functions of nourishing qi, alleviating pain, tonifying spleen and stomach, eliminating phlegm, and relieving coughing.” [1]

Licorice root is being studied in many different areas for effectiveness. One of those areas is in the treatment of obesity. According to the University of Maryland, people who ate licorice over a two month period had a reduction in body fat.

Another study showed that a topical ointment prepared from one of the acids found in licorice reduced the thickness of fat found on the thighs of human subjects.

Finally, a third study looked at the effects of licorice flavonoid oil. This was the most effective of the research studies aimed at analyzing licorice’s ability to help combat obesity.

Those who consumed the licorice flavonoid oil over an 8-week period saw a reduction in body fat, body mass index, LDL cholesterol, and body weight. There are more studies needed as the long-term health risks of licorice use are yet unknown.

Early findings point to licorice as a possible source of relief from hot flashes for women in menopause. The University of Maryland highlights a study that found licorice root to be more effective than hormone replacement therapy when treating hot flashes.

This may come as good news for many women who have learned that hormone replacement therapy may not be the safest option to treat their menopause symptoms.

Toxicity
Licorice is one root you do not want to play around with. Studies have shown that those who ingest more than 20 gr of licorice a day may experience increased levels of aldosterone. This hormonal increase can cause headaches, high blood pressure, and heart disease.

If you already suffer from heart disease, kidney disease or high blood pressure, these negative effects could be seen with as little as 5 g of licorice root a day.

Interactions
Licorice root will interact with many prescription medications. There are major interactions noted on Web M.D. with the medications, Warfarin and Coumadin.

Those drugs with lower levels of interaction include but aren’t limited to:

Licorice root may have interactions that can complicate surgery. It is recommended that you stop taking licorice root 2 weeks before a scheduled surgery. In addition to surgical complications, licorice has been shown to lower libido in men.

It can also worsen the symptoms of by lowering levels of testosterone. These hormone-altering effects are also seen in women because licorice can act as a source of estrogen in the body. If you have hormone-sensitive conditions like uterine fibroids or breast cancer, you should avoid the use of licorice root.

Using licorice as a form of medicine should only be done so under the supervision of your physician. Even with their permission regular blood pressure, monitoring may be necessary to avoid any long- term damage.