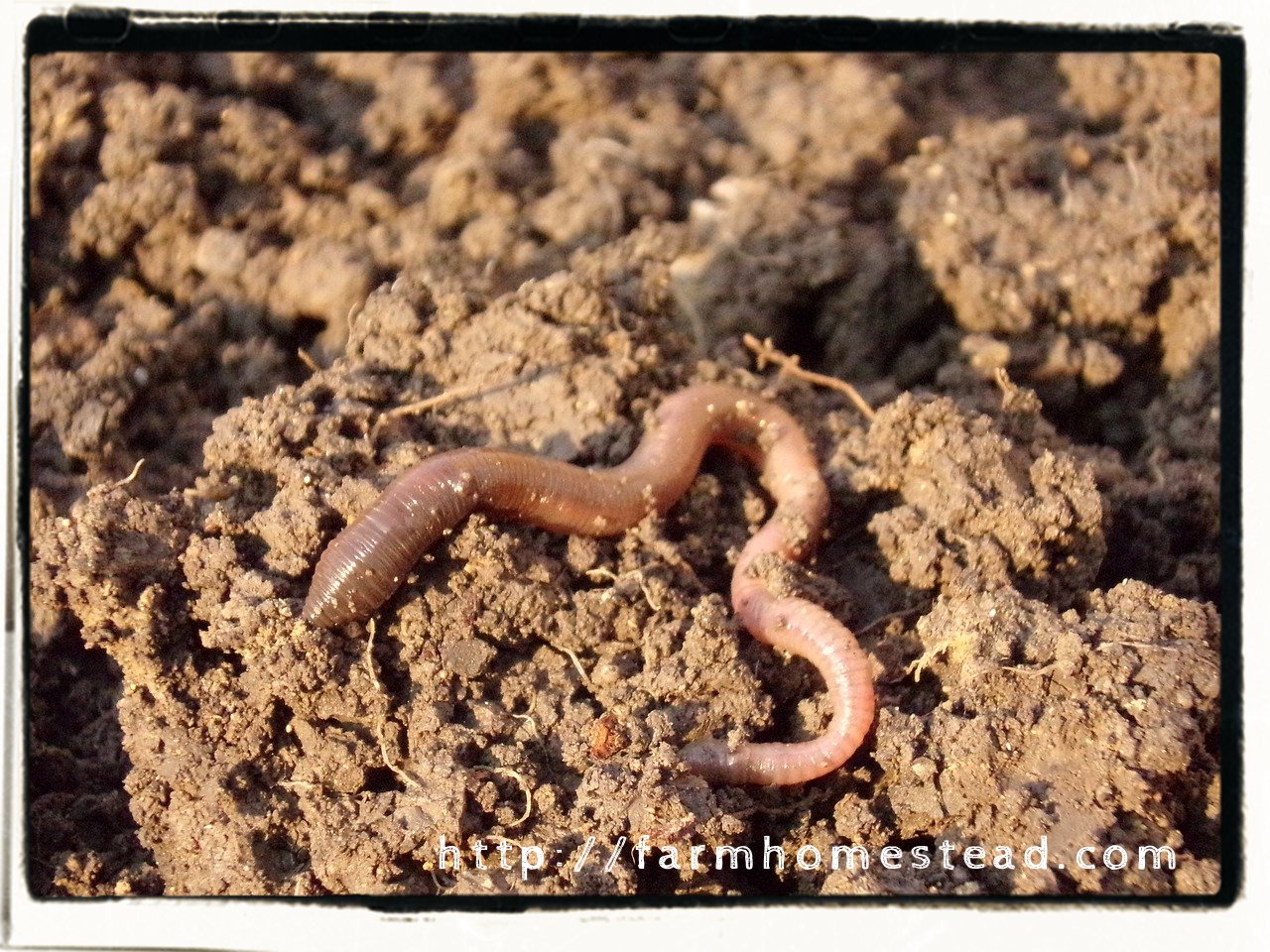 Why Build a Worm Bin?

Get vermicomposting in five easy steps:

Wooden, plastic or metal boxes or tubs may be used. The container should be 8″-12″ deep and of a
size to accommodate the amount of garbage you produce. Approximately one square foot of surface area is needed for each pound of kitchen vegetable wastes per week. For example, a 1’×2′ × 3′ box will serve a family of 4 to 6.

Bedding is what the worms live in and is also a food source for the worms. Bedding holds moisture and provides a medium in which the worms can work and the garbage can be buried. It is material high in carbon and made to mimic decaying dried leaves on the forest floor, the worms’ natural habitat. The bedding should be moist (often similar to the consistency of a wrung-out sponge) and loose to enable the worms to breathe and to facilitate aerobic decomposition of the food that is buried in it. It must be light and fluffy enough to allow air exchange.

Bedding must be well soaked in water and wrung out before adding to the bin. You may add a handful of dirt every time the bedding is changed although it is not necessary.

Bedding must be well soaked in water and wrung out before adding to the bin. You may add a handful of dirt every time the bedding is changed although it is not necessary.

Most vermicomposters avoid using glossy paper from newspapers and magazines, junk mail, and shredded paper from offices, because they may contain toxins which may disrupt the system. Also, coated cardboard that contains wax or plastic, such as milk boxes, cannot be used. Newspaper and phone books printed on regular, non-glossy paper with non-toxic soy ink are safe for use, and decompose relatively quickly. Some bedding is easier to use and add food scraps to than others.

Red worms are the most satisfactory and efficient type of worm to use for composting. The worms need adequate temperature, moisture and ventilation. The optimum temperature Is from 55-77 degrees. Remember, an active worm bin must be kept in a heated garage or basement during the winter to prevent freezing. The worm population increases (or decreases) according to how well they are fed. To determine the number of worms needed to populate a bin, figure one pound of worms for each pound of kitchen vegetable wastes produced per day. Worms process their own body weight of organic matter each day.

Kitchen vegetable waste which can be composted includes vegetable and fruit scraps, egg shells, bread products, coffee grounds and tea leaves. Meat, bones, fats, and dairy products should not be composted. It may be helpful to keep a plastic container near the kitchen sink to collect scraps. Keeping the container uncovered will prevent odors but may attract fruit flies. About twice a week, the contents may be buried in the worm bedding, rotating around the box utilizing a different area each time. Be sure to cover all of the worm food with bedding. If your bedding dries out a sheet of black plastic can be laid over the surface to retain moisture.

While there are several methods of harvesting compost and adding new bedding, the most convenient is to move the compost to one side of the bin and add new bedding and garbage to the other. Replacing the plastic sheet on only the half of the bin containing the new bedding will allow the compost to dry out some. The worms will migrate to the fresh material and the compost may be removed and replaced with new bedding. This migration may take several weeks.

Make Your Own Worm Bin 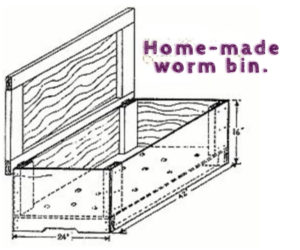 This system is designed for composting vegetable food wastes using red worms. Food wastes and worms are “bedded” in shredded and moistened newspaper, cardboard, peat or brown leaves. The worms turn both food wastes and bedding into a high-quality compost suitable for use on house plants, seedlings or general garden use.

To maintain this system simply rotate burial of food wastes throughout the bin. Every 3-6 months compost should be moved to one side of the bin and new bedding added to the empty half. At this time start burying wastes in the new bedding only. Within one month worms will populate the new bedding, finished compost may be harvested and the rest of the bin can be rebedded. During the winter, worm bins should be kept in a cool indoor space such as a basement or warm garage to avoid freezing. A properly maintained worm bin is odorless. Bins may be placed in a shady outdoor space the remainder of the year. Flies may be controlled by placing a sheet of plastic over the bedding.

This bin can be built for about $35 with new wood and hardware, or less using recycled materials such as old wood boxes or other containers. Any worm bin must have drains in the bottom and a tight fitting lid to keep moisture in and pests out. If you plan to bring your bin into your living area, place a layer of remay (also known as row cover), on the bottom of the bin, before adding the bedding. A starter batch of worms may be purchased at a small additional cost, or find some in an old compost pile. 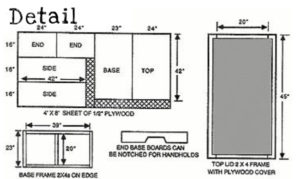 Align, measure and cut plywood as indicated in drawing above. Cut the 12 foot 2’×4 into five pieces: two 39″, two 23″, and one 20″ long. Nail the 2’×4s together on edge with two 16d nails at each joint as illustrated in the Base Frame diagram. Nail the plywood base piece onto the 2’×4 frame.

Cut four 1 foot lengths out of the 16 foot 2’×4. Take each plywood side piece and place a one foot 2’×4 under each of it’s ends so that the 2’×4 is flush with the top and side edges of the plywood, and nail the boards into place. Nail the side pieces onto the base frame. To complete the box, nail the ends onto the base and sides. To reinforce the box make sure there is a nail staggered at least every 3 inches wherever plywood and 2’×4s meet. Drill twelve ½” holes through the bottom of the box for drainage.

To build the lid, take the remaining 12 foot 2’×4 and cut it into two 45″ pieces and two 20″ pieces and lay them flat (short pieces on the inside as indicated in diagram above) so that the plywood top is inset from the edges of the 2’×4 by 1-½” all the way around the perimeter. Nail the plywood onto the 2×4 securely. Place the hinges on the backside of the box at both ends on the 2’×4s, and on the under side of the 2’×4 lid frame, so that the lid will stand upright when opened.