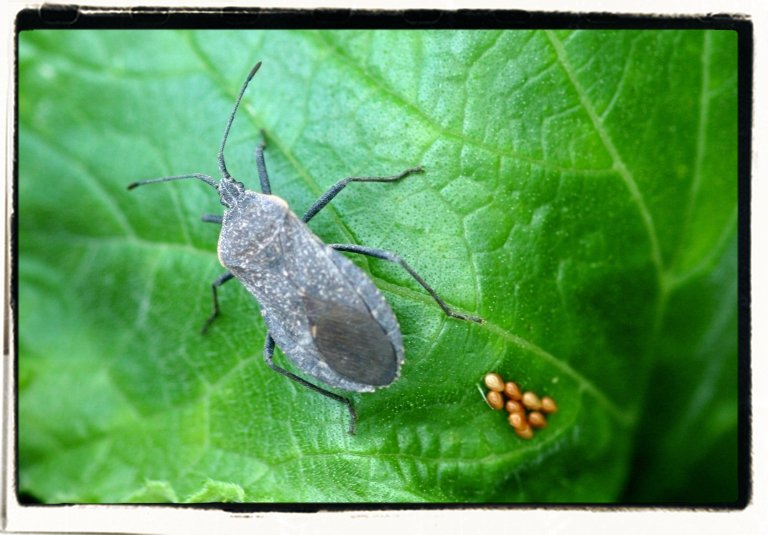 Squash bugs are seriously damaging pests. Seriously squish them before they get a foot hold!

I abruptly encountered squash bugs for the first time when I came home from a 2 week hiatus from my home garden. My beautiful squash were all wilted over, yellowing, and SICK. As I drove up and saw them I didn’t take a suit case out of the car, I ran, literally, to the garden to have a look see.

If you have ever had a squash bug infestation, you know what I mean when I say that there were quite literally hundreds of the ugly little cretins crawling on every other inch of my 12, four foot high (or were) yellow crook neck squash and zucchini plants.

Cucurbits are the most frequented and preferred food choice of these voracious eaters, although I have found them running amuck on potato plants. Their absolute favorite in my garden is hands down zucchini and yellow squash. I found them all over cantaloupe last year after they had completely devoured the squash, but they didn’t seem to do much damage to speak of. I think they were just biding their time toward the end of the summer so they could hide until the next year.

This year, I planted early. Not the best idea I’ve ever had, but the weather was so fabulous! Did not use a row cover, as I only planted four plants in completely separate locations in the garden. As I suspected, the squash bugs found the zucchini closest to where the outbreak was last year first. It took about two weeks for them to find the others.

This summer (2011) I haven’t treated them at all. I have hand picked every single bug, squished every single egg, and smashed every little nymph I could find. I did the same with potato bugs. I found reasonable success with the potato bugs, but the squash bugs took out two of my zucchini even with picking them off every other day or so.

The very best thing I have found to actually kill them without having to catch every single one and squish them (and who has that kind of TIME?) is insecticidal soap. I am seriously not kidding when I tell you that it stops them dead in their tracks. Oh, they may crawl around for a while after you spray them screaming “die!” at the top of your lungs, but they WILL die. The real trick is to put plenty of dish soap in the spray. I bought a cheap sprayer at the farm supply shop for like ten dollars, best investment of the season. I spray in the evening when it gets a bit cooler, but that is only because I cannot get into my garden in the early morning hours, that would be first choice.

Related  How to Roast Pumpkin Seeds

I would not suggest spraying while the sun is hot, it is too hard on your plant. Acorn squash is particularly touchy in direct sun. Some damage I have done to my acorn squash was worse than what the squash bugs were doing. The concentrated soapy spray is just harder for that squash variety to deal with. I’ve tested it over and over. Acorn squash is more sensitive.

You cannot simply spray the eggs, however. You MUST get them off the plant. Use a “bug jar”. Get an empty jar and fill it half full with vinegar. Chop up a jalapeno (or any other hot pepper you are growing) and a clove of garlic and add it to the vinegar. Pull off the part of the leaf with the eggs on it. Just rip the section of eggs off the leaf, you won’t effect the growth of the plant much if any. Just push the leaf section down into the jar and replace the lid when you are done. I do this with all bad bugs I find… eggs, bugs, you name it; in the bug jar they go.

The key to not letting squash bugs take over is keeping up on removing the eggs and killing them before they lay more. It can be time consuming. But zucchini squash is on the top 10 list of things to buy organic. Seems they are making zucchini a top GMO crop. It is a nutritious and versatile food, well worth the time it takes to save!