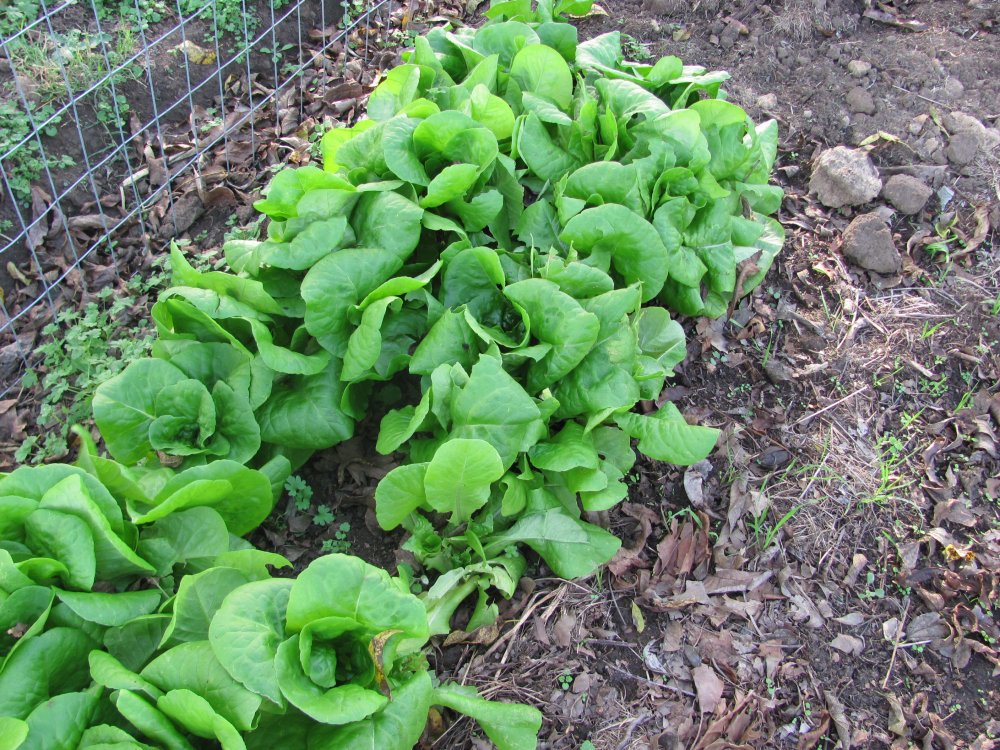 Popular Lettuce & Mixed Salad greens to grow in your garden.

Lettuce is not known in the wild. The progenitor of the many forms of garden lettuce was probably Lactuca serriola, a common weed that grows in waste places, fields and clearings in Europe, northern Asia and North Africa. The Europeans have developed a great many lettuces of the romaine and loose leaf types. Most of the crisp head lettuces were developed in the US to withstand transport from fields in California to markets in the east. In China, the stem lettuces are the most popular, grown and sold everywhere.

It is claimed that lettuce is an excellent remedy for acid indigestion and “heartburn.” The bitter, milky latex sap is a mild narcotic and sleep inducer. The early Romans ate lettuce at the end of meals to aid digestion and induce sleep. Later, with the development of lettuce varieties containing less of the bitter, soporific sap, they ate lettuce at the beginning of the meal to whet the appetite. The European prickly lettuce (Lactuca serriola) contains considerably more of the milky, narcotic juice and has several medicinal and herbal uses.

The sap is sometimes dried and used to adulterate opium. American wild lettuce (L. canadensis), a common weed throughout much of North America, is usually too bitter to eat, but was used extensively by Native Americans as a sedative and for pain relief.

Know for its edible, slightly bitter leaves, watercress has a tart peppery taste. Watercress is so called because it grows in basins of running water. We used to gather it in the spring creeks that are so abundant in Northeastern Oklahoma when I was a child.

Nothing evokes springtime better than cress, bursting with vitamins and with a nose-tickling peppery flavour. Go green! Cress played an important historical role, filling the nutritional deficiencies that resulted from a limited and repetitive diet. Sailors even took its seeds along to sow randomly on their travels, all the way to the Arctic shores where scurvy was raging. Watercress is rich in fiber, minerals and vitamins A, B and C.

It must be refrigerated with its roots immersed in water in order to keep it properly.

From the Latin “intibum” – Witloof is a Flemish name meaning “white leaf” Compact, hypertrophied bud of witloof chicory obtained by forcing the plant in dark conditions.

Nature has its little whims, and even though it may allow itself to be altered by human intervention, it can also provide some surprises in which man plays no part. Thus, In 19th century Belgium, a man who had forgotten his chicory roots in a cellar was amazed to discover them plump and covered with long yellowish leaves, which had grown in the dark, warm conditions. Curious, he tasted them, found they had a good flavour, and began to cultivate them.

However, it is to another Belgian that we owe endive as it is eaten today: the botanist Brézier who developed it from coffee chicory, which had a small root. The market stalls of the capital began to display this new vegetable in 1846, and it quickly became known as Brussels endive.

With its peppery and slightly bitter flavor, arugula is a terrific green to throw into an otherwise boring salad. Red Lollo Rosso lettuce is dark copper red fading to bright green, crisp, brittle when snapped. The leaves are finely crinkled with jagged edges resembling lace. This lettuce is appreciated for its unique shape and refreshing taste.

To harvest, don’t pull the whole plant, be selective, go down the row choosing only the largest tenderest leaves. This way it will continue to replace itself the whole season.

Mâche is from the French mâcher, “to chew.” A small-leafed. The leaves may be wide or narrow, round or pointed, ranging from light to very dark green. Closely related to valerian – hence its old French name valérianelle – this Mediterranean annual is also called corn salad, since it tends to grow wild in corn fields, and lamb’s lettuce, because it attracts animals. The cultivation of mache goes back to the mid 17th century. In the old days it was also sometimes called “priest’s salad” since it was a staple of rectory gardens.

Though this little salad green is quite resistant to cold, it does have some requirements. In particular, it needs light, deep soil; and nice loose earth that flows freely between your fingers; simply put, Lamb’s Lettuce needs sand. Unaffected by cool winter temperatures, cover with a thin layer of sand that will allow the bunches to open up without the leaves being damaged. In 4 to 12 weeks, Lamb’s Lettuce will be fully developed. Winter Lamb’s Lettuce is a darker green than spring Lamb’s Lettuce, which is a paler shade.

Lamb’s Lettuce essentially contains B-group vitamins and vitamin C. Since they are water soluble, they can be easily lost in water, so avoid over-washing! Rinse the Lamb’s Lettuce quickly under a stream of cool water to remove any possible impurities. 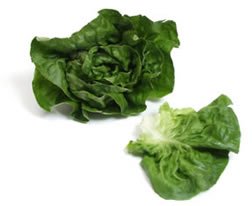 Along with crisphead lettuce, butterhead is one of the two main types of head lettuce. This vegetable is a small head lettuce with leaves that grow close to and surrounding the head of the vegetable. The leaves may be light green to dark green or a reddish purple color. Small loose-headed greens with tender soft leaves provide a sweet flavor for salads and sandwiches. It is also known as bibb, Boston or limestone lettuce.

This leafy green vegetable is used in salads, cooked vegetable dishes, and is commonly used on sandwiches.

The most popular of the garden lettuce, and by far the easiest to grow, this vegetable is a loose-leaf variety of lettuce that can be grown as a flat, smooth, rough, round, frilly or oak shaped leaf.’Black Seeded Simpson’, introduced prior to 1888, and still the most popular cultivar for the fresh market and the home garden. The colors commonly grown can range from bright green to a red-bronze color. Leaf lettuce doesn’t form a head, but their long, curly leaves grow in a loose bunch. 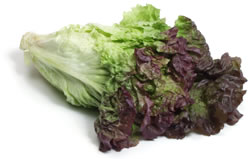 Because lettuce has shallow roots, it should be hoed or cultivated carefully. Frequent light watering causes the leaves to develop rapidly, resulting in high-quality lettuce. Overwatering, especially in heavy soils, can lead to disease, soft growth and scalding or burning of the leaf margins. Organic mulches can help moderate soil temperature and the microenvironment to produce quality lettuce in less than ideal weather conditions.

Leaf lettuce is used in the same way as head lettuce, only its more perishable leaves may wilt and darken quicker.

Its leaf resembles the oak leaf. Oak leaf lettuce is a type of butter lettuce. The lettuce should be deeply coloured and form a head. The leaves should be curly, crisp and firm.

Oak leaf lettuce does not keep for a long time (2-3 days). It must be stored in the vegetable crisper of the refrigerator or in a cool, dark place.

Wash oak leaf lettuce thoroughly but quickly so that it retains its nutrients. If your lettuce is looking wilted, dip it into warm water and then rinse it under cold water to give it new life.

Grow it abundantly! – it can be quite pricey if you have to buy it.

Arugula is an aromatic salad green. It is also known as rocket, roquette, rugula and rucola, and is popular in Italian cuisine. How to grow, use, and store. Like most salad greens, Arugula is very low in calories and is high in vitamins A and C. A 1/2 cup serving is two calories.

Arugula is one of those great, simple greens to grow at home. Sow the seeds in a sunny location in succession plantings (approximately every 20 to 30 days) from early spring to fall.

Arugula performs best in spring to early summer. After that time, plant it under the shade of an “airy” tree (not dense shade), or under shade cloth. It is not fussy at all, although too much drought and summer heat will cause the leaves to be smaller and more “peppery”.

This plant does go to “seed” fairly quickly. But use the flowers in your salads and collect seeds for future plantings. And if you make your “succession” plantings, then the new plants will be ready as the older plants are going to seed.

To harvest simply pick the young leaves and the plant will keep generating new ones for months. Older leaves are a bit tougher and hotter.

The flowers are small, white with dark centers and can be used in the salad for a light piquant flavor.

Rinse the leaves in cool water and dry on paper toweling. Wrap leaves tightly in plastic or a zip lock bag. Best if used within two days.

From the Greek kikhorion; its ancient Latin name, cichorium intybus means “January plant” or “winter salad.”
Chicory is an annual or biennial herbaceous plant with rosette leaves produced from certain tender-rooted varieties, from the same family as endive.

Since antiquity, wild chicory has been the delight of cooks and Egyptian, Greek and Roman physicians. Grown principally in Flanders, in the triangle defined by Dunkirk, Calais and St. Omer, chicory is harvested in the fall. Drying takes place just a few days after picking so that the root retains all its qualities. The root is then cut up and ground. It is sold powdered, in liquid form or as an extract.

What is referred to as “leaf” chicory falls into several categories:

Rich in calcium, phosphorus, Vitamins B and C, Chicory is delicate and should be eaten right away. It can, if necessary, be stored for a few days in a cool place or in the refrigerator crisper.

To increase its keeping time, it can be washed, spun dry and wrapped in a damp cloth.

Airtight packaging will make it rot, so be sure that air can always circulate around the leaves.

Swiss Chard is a relative of the beet, grown for its white, fleshy chard and its greens, which resemble spinach. A distinction is made between the leafy part of the plant and the actual chard, which refers to the broad middle stalks and the side ribs. Thus there are two kinds of cultivation, and different uses and cooking methods. The chard was once grown exclusively to be eaten at Christmas in the south of France, and constituted the highlight of the Christmas Eve meal. Only the ribs, having a flavour reminiscent of artichoke hearts, were eaten.

Low in calories, Swiss chard is an ideal vegetable for those watching their weight, as well as being a good source of potassium, calcium and fiber.

Rich in potassium, calcium and iron, Swiss chard is sensitive to pressure: keep it cool without packing together too tightly. It keeps better than spinach, but no longer than two days. Sprinkle with water if necessary.