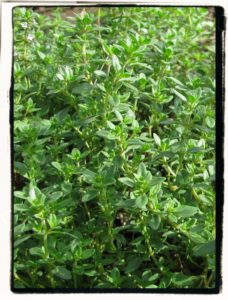 Botanical: Thymus vulgaris (many, but vulgaris is most common)

The use of thyme in cooking is voluminous and beyond the scope of a small materia medica, I would be remiss not to direct you to search the internet for ways to use this fabulous herb. To tickle your interest, the following quote is from a website that is copyrighted, but their observation of this notable herb is so unique, I’d like to share it…

When I think of thyme, I am reminded of a sustained bass note in a symphony. I may not be conscious of which note is being played, but I am aware that something is underpinning all the other melodies and notes in the symphony. Similarly, thyme buttresses and balances other flavors in a dish. [1]

Baked chicken would never be good, IMHO, without thyme.

Nicholas Culpepper wrote “The English Physitian” in 1652. It was later renamed “The Complete Herbal”. Culpepper wrote during a tumultuous time; in the midst of the turmoil of the English civil war. The College of Physicians was unable to enforce their ban on the publication of medical texts. It was then that Culpeper deliberately chose to publish his translations in colloquial English as self-help medical guides for use by the poor who could not afford the medical help of expensive physicians. [2]

In his historical herbal, in Culpepper wrote …

It is a noble strengthener of the lungs, as notable a one as grows; neither is there scarce a better remedy growing for that disease in children which they commonly call the chin- cough, than it is. It purges the body of phlegm, and is an excellent remedy for shortness of breath. It kills worms in the belly, and being a notable herb of Venus, provokes the terms, gives safe and speedy delivery to women in travail, and brings away the after birth. It is so harmless you need not fear the use of it. An ointment made of it takes away hot swellings and warts, helps the sciatica and dullness of sight, and takes away pains and hardness of the spleen. Tis excellent for those that are troubled with the gout. It eases pains in the loins and hips. The herb taken any way inwardly, comforts the stomach much, and expels wind. [3]

Thyme is considered to be a potent antiseptic – good for internal as well as external use. It is especially useful for the immune system. It bolsters the immune system to combat various contagions caused by bacteria, virus and fungus. This herb and preparations with it are especially effective in tackling infections in the digestive, respiratory and genitourinary tracts, for instance colds, coughs, flu, Candida (a genus of the pathogenic yeast-like fungi), gastroenteritis, cystitis and salpingitis (inflammation of a salpinx). Consuming thyme as part of a balanced diet has been found to be very beneficial for making our immune system stronger.

The antioxidants present in thyme fight with the free radicals of our body, stabilize them, and prevent them from causing oxidative damage to our cells, including the white blood cells that form the backbone of the immune system.

By protecting our immune system from this oxidative damage, thyme strengthens our immune system, and when our immune system is functioning at its peak it can do its job, restraining disease causing microbes like bacteria, virus, fungi etc… efficiently decreasing the risk of common problems like fever, flu, cold etc… and more importantly, preventing them from getting a foothold in our system.

Thyme contains properties effective in providing relief for conditions of the bronchial tubes, conditions like asthma and whooping cough. It also contains expectorant properties and this helps strengthen the production of fluid mucous that helps in removing phlegm.

Thyme helps relax the muscles of the gastrointestinal tract. The soothing property of thyme helps calm the digestive tract and eases the pain of gas and colic, spastic colon and irritable bowel syndrome. The combined astringent and antiseptic properties it contains help prevent as well as curing diarrhea and its causes. Also helping to restore the healthy bacterial colony in the digestive tract. It is particularly effective in dealing with candidiasis (infections caused by fungi of the genus Candida).

Thyme's antimicrobial, antiviral, expectorant, anticatarrhal, and lung protective qualities are used by herbalists to support resolution of cold and flu, as well as other lower and upper respiratory tract infections. Click To Tweet

In addition, thyme also functions as a liver purifying tonic. It is effective in easing indigestion, lack of appetite, skin disorders, anemia, lethargy and gallbladder as well as invigorates the digestive system and function of the liver; it stimulates the production of white blood cells.

Thyme’s volatile oil constituents, especially thymol, are antimicrobial against different kinds of bacteria including those involved in upper respiratory infections. Choose thyme for “mucousy” respiratory conditions with productive coughs (rather than dry coughs). Thyme’s antimicrobial, antiviral, expectorant, anticatarrhal, and lung protective qualities are used by herbalists to support resolution of cold and flu, as well as other lower and upper respiratory tract infections.

“Those herbs which perfume the air most delightfully, not passed by as the rest, but, being trodden upon and crushed, are three; that is, burnet, wild thyme and watermints. Therefore, you are to set whole alleys of them, to have the pleasure when you walk or tread.”
– Francis Bacon 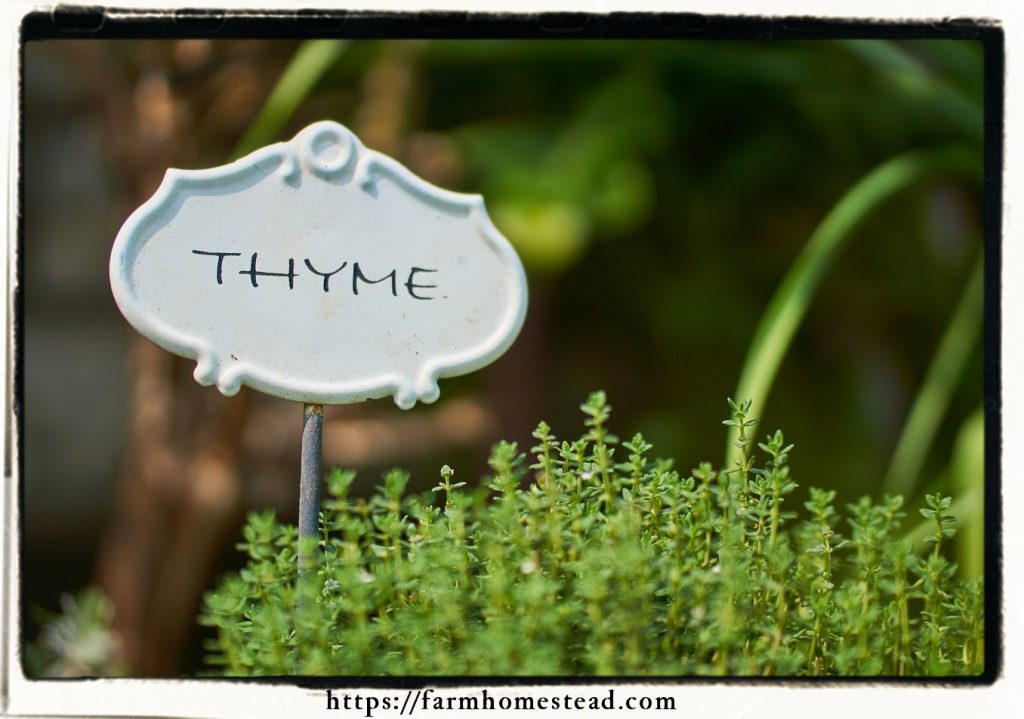