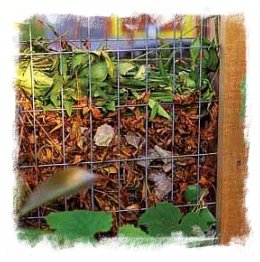 With these composting principles in mind, everyone can make excellent use of their organic wastes

The Biology of Compost

The compost pile is really a teeming microbial farm. Bacteria start the process of decaying organic matter. They are the first to break down plant tissue and also the most numerous and effective composters. Fungi and protozoans soon join the bacteria and, somewhat later in the cycle, centipedes, millipedes, beetles and earthworms do their parts.

Anything growing in your yard is potential food for these tiny decomposers. Carbon and nitrogen, from the cells of dead plants and dead microbes, fuel their activity. The microorganisms use the carbon in leaves or woodier wastes as an energy source. Nitrogen provides the microbes with the raw element of proteins to build their bodies.

Everything organic has a ratio of carbon to nitrogen (C:N) in its tissues, ranging from 500:1 for sawdust, to 15:1 for table scraps. A C:N ratio of 30:1 is ideal for the activity of compost microbes. This balance can be achieved by mixing two parts grass clippings (which have a C:N ratio of 20:1) with one part fallen leaves (60:1) in your compost. Layering can be useful in arriving at these proportions, but a complete mixing of ingredients is preferable for the composting process. Other materials can also be used such as weeds and garden wastes. Though the C:N ration of 30:1 is ideal for a fast, hot compost a higher ratio (i.e., 50:1) will be adequate for a slower compost.

The more surface area the microorganisms have to work on, the faster the materials are decomposed. It is like a block of ice in the sun – slow to melt when it is large, but melting very fast when broken into smaller pieces. Chopping your garden wastes with a shovel or machete, or running them through a shredding machine or lawnmower will speed their composting.

A large compost pile will insulate itself and hold the heat of microbial activity. Its center will be warmer than its edges. Piles smaller than 3 feet cubed (27 cu.ft) will have trouble holding this heat while piles larger than 5 feet cubed (125 cu.ft) don’t allow enough air to reach the microbes at the center. These proportions are of importance only if your goal is a fast hot compost.

All life on Earth needs a certain amount of water and air to sustain itself. The microbes in the compost pile are no different. They function best when the compost materials are about as moist as a wrung-out sponge, and are provided with many air passages. Extremes of sun or rain can adversely affect this moisture balance in your pile. 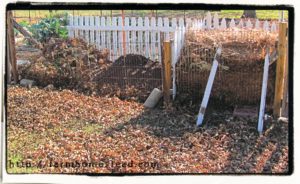 The faster the composting, the hotter the pile. If you use materials with a proper C:N ratio, provide a large amount of surface area and a big enough volume, and see that moisture and aeration are adequate, you will have a hot, fast compost (hot enough to burn your hand!) and will probably want to use the turning unit discussed in the next section. If you just want to deal with your yard wastes in an inexpensive, easy, non-polluting way, the holding unit will serve you well.

To make compost regularly, it is helpful to have compost bins in some form. You can construct two bins out of planks or concrete blocks. Make the bins about 4 feet high, 4 feet wide, and as long as desired, and open at one end for easy access. Leave spaces between blocks or planks for aeration. Accumulate plant refuse in one bin while the composting process is taking place in the other. A third bin may be desirable for near-finished or finished compost storage.

A simple, portable compost bin can be made with three or four used freight pallets, which are simply stood on their ends in a square or open square and lashed or otherwise held together. This type of bin can be disassembled for easy turning and emptying and then reassembled around the new pile. A chicken wire cage supported by three or four wooden stakes will also work satisfactorily, but is less sturdy.

There are also ready-made and kit composters available, including slat-sided cylinders into which refuse is added from above and compost removed at ground level. Rotating barrels for easy turning are also available; gardeners who have limited strength may find either of these types easier to deal with than the standard compost bin. Just have a look see at what’s available…


Whichever type of compost maker you use, it’s a good idea to make use of the nutrients which leach out from under the pile. This is easily done by locating the composter in the garden (which also reduces hauling time) or under a large fruit tree. Or, if the compost pile is on a slope, trenching can direct the run-off.

How to make a compost bin.

Many different materials are suitable for composting organisms. Composters often refer to “C:N” requirements; some materials contain high amounts of carbon in the form of cellulose which the bacteria need for their energy. Other materials contain nitrogen in the form of protein, which provide nutrients for the energy exchanges. It would however be an over-simplification to describe composting as about carbon and nitrogen, as is often portrayed in popular literature. Elemental carbon – such as charcoal – is not compostable nor is a pure form of nitrogen, even in combination with carbon. Not only this, but a great variety of man-made, carbon-containing products, including many textiles and polyethylene, are not compostable – hence the push for biodegradable plastics.

The most efficient composting occurs by seeking to obtain an initial C:N mix of 25/30 by dry chemical weight. Grass clippings have an average ratio of 10-19 to 1 and dry autumn leaves from 55-100 to 1. Mixing equal parts by volume approximates the ideal range.

Poultry manure provides much nitrogen but with a ratio to carbon that is imbalanced. If composted alone, this results in excessive N-loss in the form of ammonia – and some odor. Horse manure provides a good mix of both, although in modern stables, so much bedding may be used as to make the mix too carbonaceous.

For home-scale composting, mixing the materials as they are added increases the rate of decomposition, but it can be easier to place the materials in alternating layers, approximately 15cm(6 in) thick, to help estimate the quantities. Keeping carbon and nitrogen sources separated in the pile can slow down the process, but decomposition will still occur.

Composting in the form of bioremediation can break down petroleum hydrocarbons, TNT and a variety of toxic compounds. This is the bacterial and in some cases fungal content of the compost, that possess the enzymatic properties to de-polymerize the complex man-made molecules. In other words, there is nothing about the composting process per se that adds or detracts from this, unless as noted above, by warming, to increase the metabolic rate of the constituent organisms.

Some materials are best left to high-rate, a thermophilic composting system, as they decompose slower, attract vermin and require higher temperatures to kill pathogens than backyard composting provides. These materials include meat, dairy products, eggs, restaurant grease, cooking oil, manure and bedding of non-herbivores, and residuals from the treatment of wastewater and drinking water. Meat and dairy products can be recycled using bokashi, a fermentation method.


Human waste can be composted by industrial, high-heat methods and also composting toilets, even though most composting toilets do not allow for the thermophilic decomposition believed to be necessary rapid kill of pathogens, such as Salmonella. This is not a problem, however, since composting toilets also incorporate the essential element of time required to reduce available substrate on which pathogens can feed, while increasing the growth of competing microbes. If these high temperatures are reached, the resulting compost can be safely used as a fertilizer for food crops and even directly edible crops provided it is not illegal in the regions where the sludge is applied. Careful filtration of the compost also prevents contamination.

Sheet composting is another method of making compost. A layer of organic materials of about 3-4 inches is spread over the soil, then covered with a 2-inch layer of soil. The organic material is allowed to decay at least three months prior to cultivating. Sheet composting on an unused portion of your garden in the fall can provide an enriched area for spring planting.