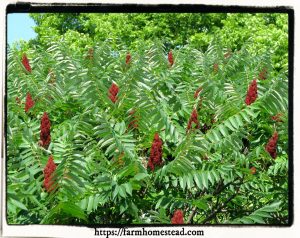 bark: antiseptic, astringent, used to build blood for young mothers, prolapsed uterus, nursing mothers The sap from the stems was used with great success to treat warts. While milkweed may be the first choice for treating warts, sumac works also.

fruit: astringent, blood purifier, diuretic, it helps promote appetite.
The fruit contains oxalic, malic, and ascorbic acids. So if you were sick, it helped in so many ways.
You can use the tea to treat a sore throat.

How the Cherokee used Sumac

All parts of Qua lo ga (common Sumacs, Staghorn and Smooth) have a medicinal use. Mild decoctions from the bark can be used as a gargle for sore throats, and may be taken for a remedy for diarrhea.

A tea from the leaves and berries also reduces fevers. Fresh bruised leaves and ripe berries are made into a poultice which soothes poison ivy. A drink from the ripened or dried berries makes a pleasant beverage which is a good source of vitamin C. [1]

The roots are edible, the young shoots also. Apache children ate the outside pieces of the bark as a “taste treat”. Note however that sumac is related to mangos and cashews, so if you have a food allergy to this plant family would probably want to avoid sumac. 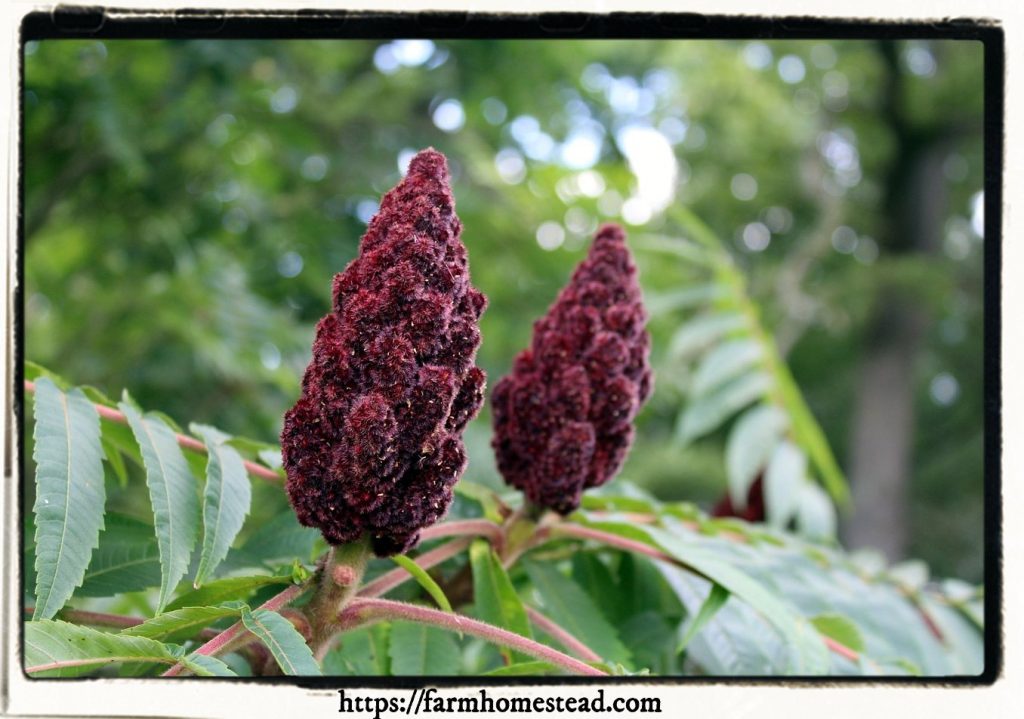 The pith from the woody stems is used not only as a dye, but as a fixative for dye as well.
leaves: brown dye
root: yellow dye
pith: (root or stem) mixed with blood root: orange dye
fruits and leaves: black dye
Some beekeepers use dried sumac flower pods as a source of fuel for their smokers.

Sumac has become one of my favorite herbs for coughs and colds and it’s so tasty no one minds drinking it. It’s also traditional for UTI’s and I’ve been impressed with its effectiveness for this. In the winter it’s amazing simmered with a little cinnamon, cloves and allspice and served warm. Just be aware it’s related to cashews and mangoes so people allergic to these plants should be cautious. [3]