Parts Used: Bark (from both root and branches)

Herbalists value the wild cherry for its inner bark which is a main ingredient in wild cherry cough syrup. A native of North America, it grows from Canada even down into Florida in the United States. It is a large, deciduous tree with a rough, reddish-brown bark and lustrous, dark green, oval, serrate leaves with pointy tips, and it bears small, delicate white flowers that bloom in April.

The flowers are followed by one-seeded, purplish-red fruits that ripen in late summer and early autumn. The tree, which may reach a height of one hundred feet, can be found wild in moist woodlands and thickets, by riverbanks, or cultivated in well-drained, neutral-to-alkaline soil in sun, and it is prone to frost damage in a cold spring.

The wood of Prunus spp is also used for smoking foods. The flavor cherry wood produces is light and sweet. It is delicate and not overpowering. This makes cherry a good wood mix with others such as apple, oak or hickory.

The Apaches ground the entire fruit, pit and all, and pressed the meal into small, hard, dark biscuit-like cakes, which were stored and reconstituted on the trail by boiling, thus both softening and driving off the readily vaporizing prussic acid with heat. [1]

Like apples, pears, bitter almond, and peach, the seeds of wild cherries contain cyanogenic glycosides, compounds that can be converted into cyanide, such as amygdalin. [2] These compounds release hydrogen cyanide when the seed is ground, which releases enzymes that break down the compounds. These enzymes include amygdalin beta-glucosidase, prunasin beta-glucosidase and mandelonitrile lyase. [3] This is what can trip people up… the flesh of cherries also contains these compounds, it does not contain the enzymes needed to produce cyanide, so the flesh is safe to eat.

Matthew Wood says it so much better, so I will just quote him here…

The classic symptoms of inflammation and fever (heat, redness, swelling, tenderness, and rapid heartbeat) for which wild cherry has long been used additionally contains cyanogens, which break down into hydrocyanic acid. This stops the Krebs cycle, which is the body’s mechanism for producing energy. Thus cyanogens cut down heat production at the cellular level. This is why too much cyanide can kill a person. Fortunately, the amount of cyanide in a small does of wild cherry bark is only enough to cool. The cyanogens and flavonoids work together to sedate and cool the organism. They are most commonly found together in members of the rose family. [4]

The Prunus serotina is in the same Rosaceae family as Apples, Plums, Peaches, Nectarines, Apricots, Almonds, Raspberries and Roses. What do plants in this family have in common? They are all wonderful herbal companions!

The inner bark of the wild cherry tree Prunus serotina is a very old and revered herbal remedy used by both indigenous Native Americans tribes made use of the wild cherry bark for healing, including the Huron, Iroquois, Malecite, Mohawk, Potawatomi, Chippewa, and Ojibwa. Most commonly used by these tribes for coughs and colds, a digestive aid, as an internal pain reliever, and as a disinfectant and eye wash. [3]

The Cherokees utilized the bark for pain relief during labor while the Mohegans saw it as a remedy for various illnesses including dysentery.

Wild cherry bark’s use for reducing the symptoms of respiratory distress is without equal in the herbal kingdom. It continues to be included in the USP (The Pharmacopoeia of the United States) and has remained since 1820, as an anti-tussive and sedative.

Wild cherry bark preparations for cough are an honest to goodness antitussive. While it is important to let a productive cough do it’s thing, there is a time to sleep. Wild cherry cough syrup is best used for an irritating, spastic cough that is NOT productive. It is also beneficial for that time after a bout with a cold/flu is on the mend, but when you go outside or take in breath too quickly and it brings on a coughing fit. It’s like there is nothing to really cough up and still you cough. (unproductive cough) Wild cherry is an herb that helps reduce spasm and ease breathing.

It is also a good anti-inflammatory, this is why it helps in conditions that include allergies.

John Uri Lloyd declared it the most commonly used domestic remedy in the late nineteenth century. It was primarily used as a coolant in fever and irritating coughs. Wild Cherry possesses flavonoids, bitter cyanogens, tannins, a bit of mucilage, resins, and volatile oils. [4]

Wild Cherry bark can also be beneficial in aiding the symptoms of herpes and shingles. Herpes and shingles are most always treated by anti-inflammatory and cooling anti-viral herbs (often combined with Wild Cherry) like Lemon Balm, Linden, or St. John’s Wort. 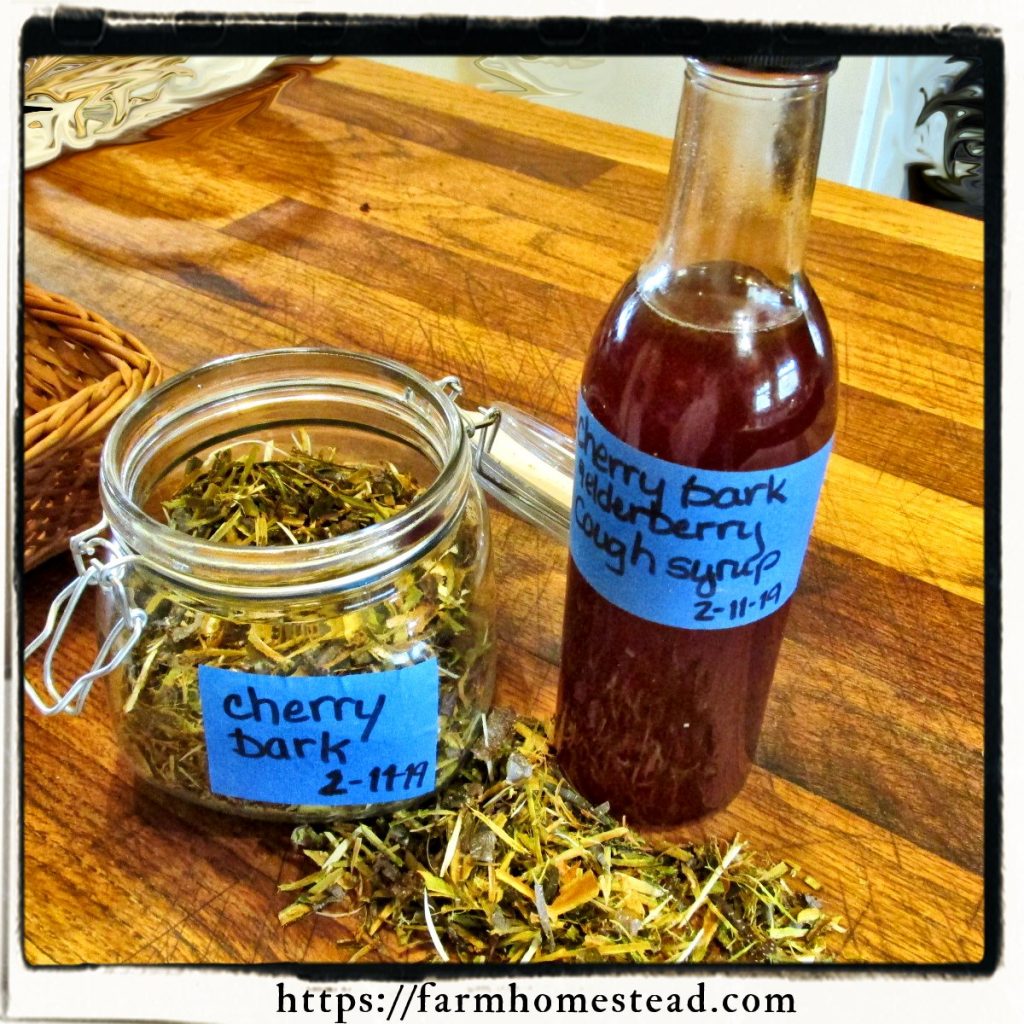 Its bark is collected, not during the early spring, as is usual with most barks, but during the summer or late fall when the cyanogenic compounds are reportedly lower in the bark. Richard Mabey [5] explains a bit about how it works in the body…

Combination menstruums are useful for extracting certain types of constituents. For plants high in both tannins and volatile oils, like the bark of wild cherry we need to use some glycerin along with the alcohol to keep the tannins from precipitating out the volatile oils. This a 1:5 tincture of the dry bark is recommended to be made with 60 percent alcohol, 10 percent glycerin, and 30 percent water. Vinegar used in combination with alcohol assists in the extraction of alkaloidal (base_ substances from certain herbs. The acid in the vinegar causes a chemical reaction wherby the alkaloids are turned in to alkaloidal salts, which in turn become available in solution. [6]

And speaking of dosage, I quote jim mcdonald…

But, while that does sound rather off putting, let us consider the insight of Michael Moore (the brilliant herbalist, not the movie guy), who attests to the safety of wild cherry, noting “…chokecherry bark presents a potentially dangerous group of physiological responses in a completely safe package.  The shadow of hydrocyanic acid is still there… but it is completely safe and diffused.  The mechanism might make a pharmacologist cringe because it so closely that of true cyanotic poisons, but once again, it is safe and reliable for even small children.  It has been used safely for centuries, probably millennia, in such diverse places as Siberia, Germany, the lakeside villages of Mandan, the mountains of northern New Mexico, and the valleys of Kentucky.”  The phytochemically gifted herbalist Lisa Ganora feels similarly: “Wild Cherry bark contains extremely low levels of prunasin which is classified as a ‘cyanogenic glycoside’, meaning it can release hydrocyanic acid (HCN) – however, since cyanide is a natural waste product of protein metabolism in the body, we have endogenous enzymes that detoxify it – they can handle up to 1 mg/hour with no adverse effects to the body at all.  It’s not a persistent toxin.  Also, the human digestive system has suboptimal pH for cyanide formation, meaning that of the amount of glycoside you do ingest, not much HCN is actually released. [source]

Theoretically large amounts may cause bronchial and cardiovascular suppression; none known with normal dosage. Please see the reference [#7] to truly clarify.