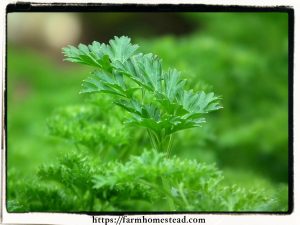 The delicious and vibrant taste and wonderful healing properties of parsley are often ignored in its popular role as a table garnish. Highly nutritious, parsley can be found year round in your local supermarket. Parsley is the world’s most popular herb. It derives its name from the Greek word meaning “rock celery” (parsley is a relative to celery). It is a biennial plant that will return to the garden year after year once it is established.

The two most popular types of parsley are curly parsley and Italian flat leaf parsley. The Italian variety has a more fragrant and less bitter taste than the curly variety. There is also another type of parsley known as turnip-rooted (or Hamburg) that is cultivated for its roots, which resemble salsify and burdock.

Here are a few quick tips:

Fresh parsley should be washed right before using since it is highly fragile. The best way to clean it is just like you would spinach. Place it in a bowl of cold water and swish it around with your hands. This will allow any sand or dirt to dislodge. Remove the leaves from the water, empty the bowl, refill it with clean water and repeat this process until no dirt remains in the water.

Since it has a stronger flavor than the curly variety, Italian flat leaf parsley holds up better to cooking and therefore is usually the type preferred for hot dishes. It should be added towards the end of the cooking process so that it can best retain its taste, color and nutritional value.

If you are making a light colored sauce, use the stems from this variety as opposed to the leaves, so the sauce will take on the flavor of parsley but will not be imparted with its green color.

According to the United States (U.S.) Department of Agriculture (USDA) National Nutrient Database [1], one cup of chopped parsley contains:

A sprig of parsley can provide much more than a decoration on your plate. Parsley contains two types of unusual components that provide unique health benefits. The first type is volatile oil components—including myristicin, limonene, eugenol, and alpha-thujene. The second type is flavonoids—including apiin, apigenin, crisoeriol, and luteolin.

Parsley’s volatile oils—particularly myristicin—have been shown to inhibit tumor formation in animal studies, and particularly, tumor formation in the lungs. Myristicin has also been shown to activate the enzyme glutathione-S-transferase, which helps attach the molecule glutathione to oxidized molecules that would otherwise do damage in the body. The activity of parsley’s volatile oils qualifies it as a “chemoprotective” food, and in particular, a food that can help neutralize particular types of carcinogens (like the benzopyrenes that are part of cigarette smoke and charcoal grill smoke).

“It’s one of the more troubling general symptoms – inflammation can actually be deadly. Parsley helps because it’s high in antioxidants like vitamin C, A, and E, which can help soothe inflammation. This can help reduce the risk of arthritis, an inflammation of the joints. It is also an excellent source of flavonoids, antioxidants that help reduce the risk of many chronic diseases, including cancer, atherosclerosis, Alzheimer’s, and Parkinson’s disease.” [3]

A Rich Source of Anti-Oxidant Nutrients

The flavonoids in parsley—especially luteolin—have been shown to function as antioxidants that combine with highly reactive oxygen-containing molecules (called oxygen radicals) and help prevent oxygen-based damage to cells. In addition, extracts from parsley have been used in animal studies to help increase the antioxidant capacity of the blood.

Vitamin C has many different functions. It is the body’s primary water-soluble antioxidant, rendering harmless otherwise dangerous free radicals in all water-soluble areas of the body. High levels of free radicals contribute to the development and progression of a wide variety of diseases, including atherosclerosis, colon cancer, diabetes, and asthma. This may explain why people who consume healthy amounts of vitamin C-containing foods have reduced risks for all these conditions. Vitamin C is also a powerful anti-inflammatory agent, which explains its usefulness in conditions such as osteoarthritis and rheumatoid arthritis. And since vitamin C is needed for the healthy function of the immune system, it can also be helpful for preventing recurrent ear infections or colds.

Beta-carotene, another important antioxidant, works in the fat-soluble areas of the body. Diets with beta-carotene-rich foods are also associated with a reduced risk for the development and progression of conditions like atherosclerosis, diabetes, and colon cancer. Like vitamin C, beta-carotene may also be helpful in reducing the severity of asthma, osteoarthritis, and rheumatoid arthritis. And beta-carotene is converted by the body to vitamin A, a nutrient so important to a strong immune system that its nickname is the “anti-infective vitamin.”

Parsley for a Healthy Heart

Parsley is a good source of folic acid, one of the most important B vitamins. While it plays numerous roles in the body, one of its most critical roles in relation to cardiovascular health is its necessary participation in the process through which the body converts homocysteine into benign molecules. Homocysteine is a potentially dangerous molecule that, at high levels, can directly damage blood vessels, and high levels of homocysteine are associated with a significantly increased risk of heart attack and stroke in people with atherosclerosis or diabetic heart disease. Enjoying foods rich in folic acid, like parsley, is an especially good idea for individuals who either have, or wish to prevent, these diseases. Folic acid is also a critical nutrient for proper cell division and is therefore vitally important for cancer-prevention in two areas of the body that contain rapidly dividing cells—the colon, and in women, the cervix.

While one study suggests that high doses of supplemental vitamin C makes osteoarthritis, a type of degenerative arthritis that occurs with aging, worse in laboratory animals, another indicates that vitamin C-rich foods, such as parsley, provide humans with protection against inflammatory polyarthritis, a form of rheumatoid arthritis involving two or more joints.

So, next time parsley appears on your plate as a garnish, recognize its true worth and partake of its abilities to improve your health. As an added bonus, you’ll also enjoy parsley’s legendary ability to cleanse your palate and your breath at the end of your meal.

“If a parsley gardener is sued, can they garnish his wages?”
~ George Carlin

“The onion tribe is prophylactic and highly invigorating, and even more necessary to cookery than parsley itself.” ~ George Ellwanger 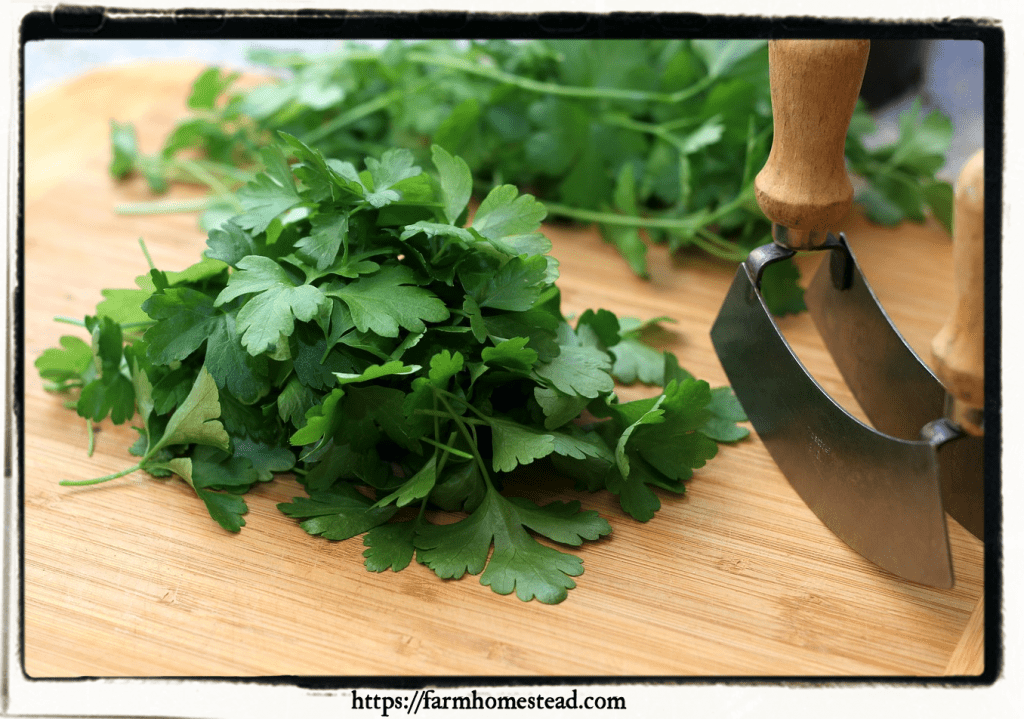