To get an accurate soil sample, it matters where you take soil samples. All most gardeners need do is divide their gardening area into areas of unique use; for example, a vegetable garden, lawn, perennial flower bed, etc…, and to sample those single use areas individually. Sometimes, however, one of these unique landscape areas will be made up of one or more distinctly different soils. These soil differences may not be obvious to the untrained eye, but different soils can have different chemical and physical properties which will result in differences in plant growth. You will need to take your soil sample in a way that will take into account the distinctly different soils that may exist in your garden areas.

An example of where to take soil samples

Think of it this way. When my husband wanted a full blood Gordon Setter puppy, he found someone that had a female to breed with his male. Mixing a male Gordon Setter with a Welsh Corgi you have a mix-blooded animal, one with characteristics of both dogs. It is with a soil sample that contains soil from more than one area with different soil types. The sample will reflect a mixture of the characteristics of each soil and therefore not correctly represent either individual area. So a soil sample that results from mixing distinctly different soils may result in soil amendment recommendations that might be high for one of the soil types and low for another.

How can you tell if your landscape area has uniform soils? Here are a few clues. First, you can expect differences in soils due to vastly different landscape positions, i.e., hilltops versus steep slopes versus poorly drained bottom areas as in the figure below. Sample each area separately.

Soil texture is a third indicator of differences in soils. A clay soil will have different properties than a sandy or a loam soil. In most small garden areas, it is unusual to find soils with significantly different soil textures. However, severely eroded areas and soils disturbed during building construction are two examples of how human involvement may have left soils with different textures in your gardening areas.

What’s the bottom line? To collect an accurate soil sample that is representative of your garden areas, you must, as much as possible, sample from areas that are consistent. So look for changes in soil landscape position, soil color, texture, and treatments to divide areas into separate samples. If there are no evident differences, then sample by unique use areas, i.e., lawn, vegetable garden, orchard, etc.

Where not to Sample Soil

When collecting samples, avoid small areas where the soil conditions are obviously different from those in the rest of the landscape.

Also, avoid yard or landscape area borders, ditch banks, old brush piles, burn sites, severely eroded areas, old building sites, fence rows, pet dropping and urine spots, etc. Since soil taken from these locations would not be typical of the soil in the rest of the landscape area, including them could produce misleading results.

Buy your own soil testing products.

Soil Sampling as a Diagnostic Tool

If one area of your landscape seems healthy and another area has bare or yellow areas or yields poorly, soil sampling may help to diagnose the problem. Where poor growth exists and this area is large enough to manage separately, then separate composite samples should be taken from both poor and good areas. By comparing the results, the soil test may point out troubles that exist due to a lack of, or an excess of, nutrients and/or an incorrect pH. However, it should be pointed out that other factors may have a greater influence on plant growth that will not be accounted for by a soil test. These include soil drainage, soil compaction, insects, diseases, rainfall, and other factors. 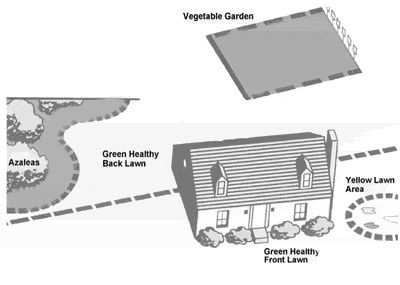 Before we proceed let’s check what you have learned about where to soil sample!

In the picture on the right, how many soil samples would you need to collect for the entire landscape? Assume that the soil behind the house (the dotted line) is a loam and in front of the house it is a clay.