energetics: Mullein root is warming. Its flavor is mildly astringent and slightly bitter. Mullein root has an earthy, sturdy taste. Leaves and flowers are cooling and moist.

“I have this cough, down in my chest,” says my daughter. “Have you been taking your mullein tincture?” I ask her.

How to Use Mullein

Tobacco-like Plant (Mullein) is one of the oldest known and used herbs, and some healers recommend inhaling the smoke from smoldering mullein roots and leaves to soothe asthma attacks and chest congestion. The roots can be made into a warm decoction for soaking swollen feet or reducing swelling in joints. It also reduces swelling from inflammation and soothes painful, irritated tissue. It is particularly useful to the mucous membranes. A tea can be made from the flowers for a mild sedative. [1]

Flowers are used in a cream or facial steam to soften and soothe skin. Make a strong infusion to brighten fair hair. A handful of flowers in 2 pints of boiling water and allow to stand for 20 minutes before straining.

Mullein water, to which a few drops of oil of rosemary have been added, is an excellent hair restorative if rubbed into the scalp daily. Ashes were once made into soap for a hair tonic. Quaker rouge was another common name. Quaker ladies, unable to use cosmetics due to their religion, would rub the downy mullein leaves on their cheeks to make them red. [3]

The leaves have an expectorant and soothing effect on the mucous membranes of the respiratory tract. The tincture is pleasant tasting and not harsh. (we think it smells a little bit like vanilla!)

It is high in iron, magnesium, potassium, and sulfur. It is considered the herb of choice for respiratory problems.

This herb contains slightly narcotic properties, though non addictive, it is one of nature’s best painkillers. It is said to relieve the pain of headaches and migraines quite effectively. Mullein shows strong overall anti-inflammatory activity and has been considered to be effective in treating swellings, especially when lymph nodes in the throat, neck, arms and groin swell or are congested. It maintains a long respected reputation for cleansing the lymphatic system generally, and it is also frequently used to relieve swollen joints and muscle pain.

To make a tea of the leaves, steep 1 or 2 teaspoons in a cup of water for about 10 minutes, and then carefully strain. The little fuzzy hairs of the leaves can irritate the throat; so remove them by straining through a cloth. To make it more palatable, you can mix it with a little peppermint, and sweeten with raw honey to taste.
Mullein is one herb recommended for children and adults to add to nearly all respiratory formulas. It can be considered to have a general tonic effect on the lungs. Click To Tweet
Mullein root tea is prepared as a decoction by placing 4 table spoons of the root in one quart of water, and simmering on low for a min i mum of thirty minutes. Allow the tea to steep for an other thirty minutes (or longer), strain, and drink. Consume four to eight ounces of the tea, two to four times daily. The water-based preparations are ideal for addressing urinary tract issues. Jim Mcdonald addresses much more about mullein root here.

Mullein oil (especially when infused with the flowers) has been used very effectively for many generations to relieve earache. Put just a few drops of this oil into the ear. It is very soothing.

To make a mullein cough syrup, gently boil a cup of dried leaves in a cup of water until half of the water is gone. Strain through a cloth, pushing all the liquid out. While it is still warm, add 2 tablespoons of raw honey and mix well. This syrup can be stored in the refrigerator for up to one month. Use it like a regular cough syrup, taking 1 teaspoon every 3 or 4 hours.

How Mullein is Used and How it Works:

This herb soothes, lubricates, and tones the respiratory system and aides in expectoration by stimulating fluid production. Mullein is sometimes used with other herbs such as white horehound, lobelia, elder, and red clover. The iridoid glycosides stimulate secretion of uric acid from the kidneys. 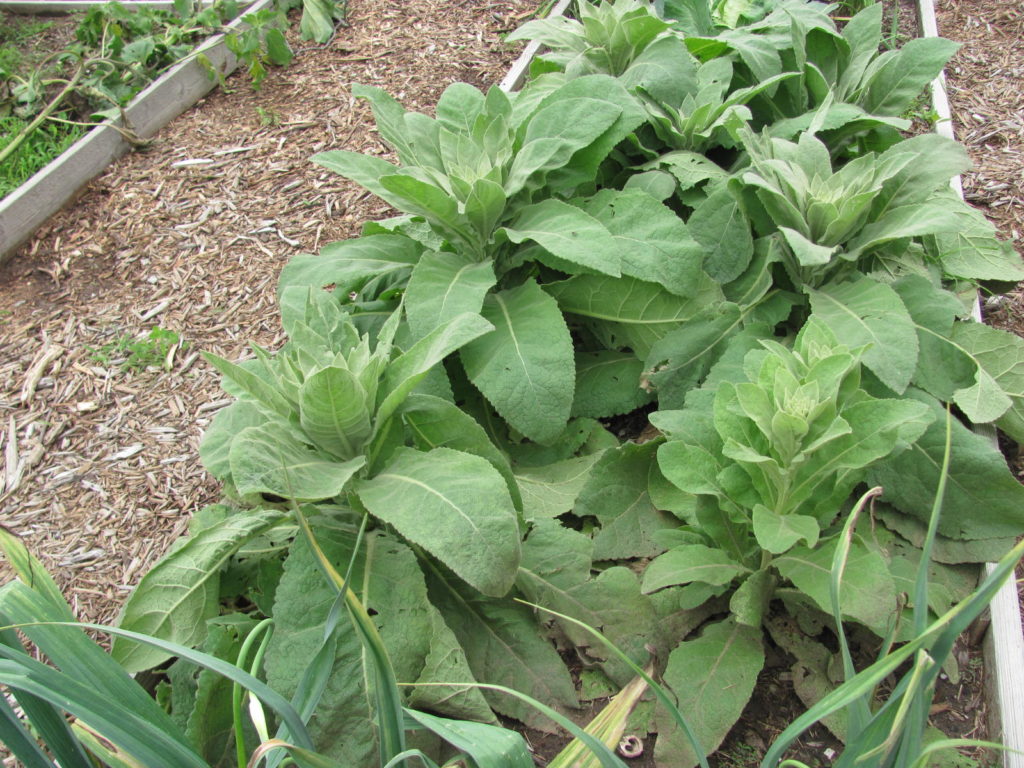