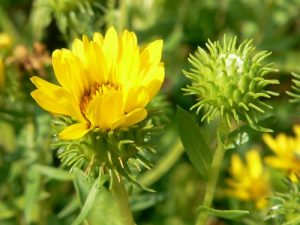 The common names, Gumweed, Gumplant, Tarweed are all referring to the resin that comes from the plant. Often called Gumweed because of its milky sap, which Native Americans used on poison ivy rashes and saddle sores, as well as coughs, colds, and tummy aches. [4]

Grindelia is a plant genus which belongs to the same family as sunflowers. Grindelia species are native to the Americas including the U.S.A and Mexico. The genus was named after the Latvian botanist – David Grindel.(1766-1836) [Madaus 1979]

The medicinal value of this plant was not recognized by the orthodox practitioners of medicine in the United States till the middle of the 19th century – after which it came into prominence as a major medicinal plant. Official recognition of Grindelia came with the introduction of the herb in the Pharmacopoeia of the United States from 1882 to about 1926. [2]

When I went to Ecuador I took with me a few grindelia buds. I was at some pretty high elevation up in the Andes. I had read somewhere that Osha and Grindelia would help my lungs acclimate to the thinner atmosphere at such heights. I chewed on a flower head hoping that it would help my lungs open up to take in the oxygen that was getting pretty thin. I steer clear of Osha for this purpose because I cannot grow it where I am and it is getting pretty hard to come by (and not to mention expensive) due to over-harvesting. Chewing on the flower head helped my respiratory system acclimate more efficiently. 🙂 I wish I knew who to thank for that tip!

Grindelia robusta, a member of the Asteraceae family, is a gangly weedy perennial topping two meters in maximum height. Its erect, branching stems are lined with many stiff, wavy-edged, serrated leaves 2 to 3 cm long. Atop the stem branches are inflorescences of a single large flower head up to 3 cm wide. The head is a vaguely thistle-like cup of green claw-like phyllaries that bend downward. The center of the head is filled with yellow disc florets and there are usually many yellow ray florets around the circumference. The flower head fills with a copious white exudate, especially during the early stages of blooming.

The resin content makes the herb bitter, so even though it can be used to make tea it’s not particularly palatable.

Also known as Rosin Weed and Gum Plant, Grindelia is a plant in the daisy family (Asteraceae) that is exclusive to the western U.S. As some of the plant’s common names suggest, the herb contains a high resin content that may be as much as 21 percent. Grindelia is not usually prepared as tea because of its bitter flavor, but is more commonly used to make infusions and tinctures for topical use.

BUT! From Ryan Drum…

Grindelia was used by the medical profession in the United States from 1880 until 1960 to treat asthma and bronchitis.

This herb supports the body in managing coughs. A cough is simply the body’s way of clearing the airways of mucus, dirt, and bugs. It can, however, be a real problem if you begin coughing throughout the day and at night.

It contains an organic compound that has antiseptic, antibacterial and mucolytic properties. [1] This means it can encourage mucus to become thinner and therefore easier to move.

People with lung conditions often experience breathing difficulties caused by a reduced capacity to carry air through the bronchi into the lungs. They also often have mucus or phlegm in the airways. Grindelia assists in relieving lung concerns like bronchitis, emphysema, and asthma. It relaxes the airways and opens them up. [1] It is an excellent expectorant and helps break up mucus.

Many resin-rich plants are expectorants and Grindelia is no exception. By nature, expectorants help loosen mucus so you can get it out by coughing it up. By increasing the water content of the mucus, making it thinner, an expectorant makes your cough more productive.

Gumweed also contains anti-bacterial properties making it useful for infection in the respiratory tract. Gumweed is very effective herb in the fight against chest congestion. [2] It produces energetic germ destroying properties that are ranked as naturally antibiotic and antifungal.

Science has yet to put their stamp of approval on natural antibiotics. And while folks have used remedies like these for hundreds of years, most treatments have not been thoroughly tested. Grindelia is antibacterial and can be considered an antibiotic. [3] Native Americans and other traditional healers have used Grindelia for hundreds of years to treat infections and wounds. Grindelia attacks bacteria that are present in the urinary tract and kills them.

Herbalist Michael Moore said that Grindelia is similar to Calendula as a healing agent for the skin. It hinders the growth of “bad” microbes, calms inflammation, and stimulates regeneration of epithelial tissue. It is also an effective remedy for poison oak.

There are so many varieties of rashes, but they all involve inflammation and irritation of the skin. Grindelia can be used in the topical treatment of skin conditions. It can fight bacteria and is calming to skin irritations. [4] This ability makes it great to use on bites, boils, burns, rashes, dermatitis, and the dreaded poison ivy (or oak) rash.

It has been used for a long time as a remedy for dermatitis caused by poison oak or poison ivy. These skin irritants belong to the genus of Toxicodendron and contain a strong resin, urushiol, which causes a severe allergic reaction in case of contact with skin.

Topical preparation of this herb can also be used to soothe burns, insect bites, and skin rashes. This plant was used for this purpose by the Native Americans and also in pharmaceutical medications in the early 1900’s.

As mentioned above Grindelia is antispasmodic. Antispasmodic herbs are used to prevent spasms and cramps of the back, stomach, intestine and bladder by helping to suppress or smooth muscle contraction. In addition to muscle relief, grindelia can be used to provide relief to stomach cramps and pains. [1]

Grindelia has a calming effect on the heart muscles, which makes it effective in mitigating the symptoms of asthma and bronchial conditions, particularly when these are linked with an increase in the rate at which the heart beats and nervous response.

It is also used an herbal remedy for whooping cough and respiratory catarrh.

In addition, it is used as an antispasmodic and disinfectant to the urinary tract.

Recommended Dose: can be used as an infusion, tincture, or simple eating of the flower.