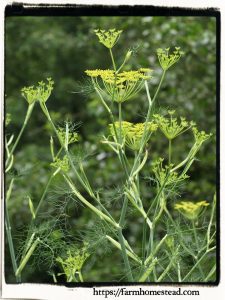 Fennel has a rich history as a medicinal and culinary herb Fennel seeds have a flavor similar to anise or licorice.

This beautiful plant is native to the Mediterranean region, but is now cultivated worldwide. It is an aromatic perennial that grows to about five feet in height, having dark green, feathery leaves, umbels of yellow flowers, and small, ridged, oval-shaped seeds, which are gathered in the autumn.

It is a very important herb possessing highly antiseptic and tonic properties. Farmers drive their flocks to feed on it owing to the abundance of milk the herb produces and the sweet odor it imparts the the milk. The foliage, brewed, also yields a valuable eye wash. It is often used to help alleviate symptoms of severe inflammation in the bowels and for acute constipation. [1]

Foeniculum vulgare contains several nutrients that play a vital role in protecting you from cancer. The herb contains an anti-inflammatory phytonutrient called anethole, which occurs naturally in fennel, known to have anti-cancer effects by stopping breast cancer cells from growing. A 2012 study [2] published in the journal Nutrition and Cancer found anethole has been shown to reduce NF-kappa B – a gene-altering and inflammation-triggering molecule -along with tumor necrosis factor (TNF) -a cancer-signaling molecule.

Fennel was one of the nine sacred herbs of the Anglo-Saxons.
In 812 CE, Charlemagne declared it was essential in every garden because of its healing properties. Its Greek name is marathon, meaning “to grow thin.” It was given to the plant because of its reputation for weight loss. [3]

Fennel in the Garden

We started out with two of these plants. Now we have fifty. I’m seriously not kidding. It grows perfectly well in partial shade. It can take a hard drought. It only has one real pest, but such a beautiful pest that we don’t even try to keep them out of the garden… the Anise and the Black Swallowtail Butterfly. I have a quote from Appalachian Feet that is oh so funny!

I don’t do a lot of companion planting. I’m not saying it doesn’t work (and I’d love to hear your success stories) but other than being impressed by mycorrhizal fungi and permaculture plant guilds I haven’t felt the need to find my plants a buddy.

Oh! EXCEPT for growing fennel next to plants plagued by caterpillars. Flowering fennel is like a beacon for caterpillar-eating wasps. Think of veggie-munching caterpillars as the bad guys, the wasps as Batman, and fennel as the bat signal. Here they come to save the day!

(Okay yeah, if I distressed your geek-meter I do know that last bit came from Mighty Mouse).

Yeah, what they said… LOL The caterpillars do minimal damage to the seed heads and bring in hoards of predatory wasps. So, win/win. The caterpillars stay. You can read the rest of the article at How to Use Fennel (or Dill) to Keep Caterpillars Off Your Vegetable Plants

Besides Italian sausage, the seeds flavor Indian spice blends as well as Chinese Five Spice. Other parts of the fennel plant are also useful, for both cooking and wellness. The bulb is harvested in the fall and sliced and cooked as a vegetable. The feathery leaves are often braised or baked with fish, eggs and poultry. Historically, it was one of the main flavors in absinthe, along with anise and wormwood. [4]

Stir it into a hot tomato soup to enhance its flavor. You can always freeze fresh fennel into ice cubes, after they are frozen, remove them from the tray and put in a zip lock freezer bag to use in your food. Use as fresh.

The juice is an extremely nutritional beverage. It contains vitamin A, B, C, E, and beta-carotene. It is a rich source of minerals like magnesium, iron, cobalt, potassium, phosphorus, sodium, silicon, and zinc. It also provides high levels antioxidants, carotenoids, and flavonoids. It contains anethole, a phyto-nutrient that provides fennel juice its strong aroma. The high levels of antioxidants neutralize free radicals in the body, preventing cell damage. 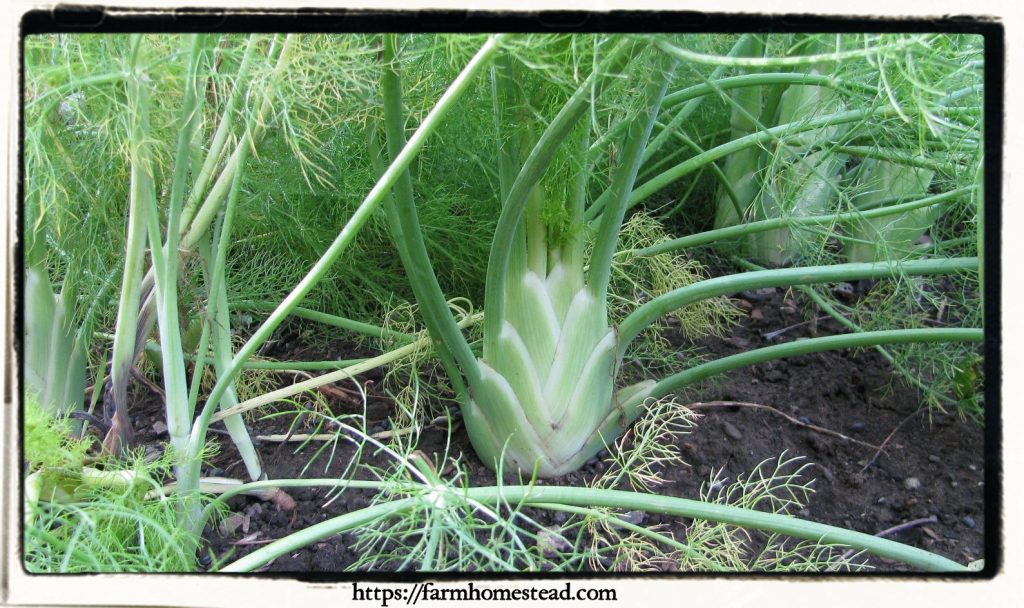 This plant is loaded with antioxidant properties, it is useful in fighting signs of aging. Fennel seeds, when consumed daily, provide the body with the minerals iron, zinc, selenium and calcium. These minerals are effective in maintaining the oxygen balance, supporting healthy skin.

Fennel Seed Face Mask
Prepare fennel seed infusion by adding a spoon of fennel seeds to half a cup of boiling water. Steep 30 minutes and add the tea to a spoon of oatmeal and spoon of honey. Mix into a smooth batter and apply to your face. Leave it on for 20 minutes. Wash off with lukewarm water.

It’s primary use in whole-herb preparations has been for digestive health. It is here that fennel shines! Seeds would be chewed after a meal to improve digestion, and it was included in many recipes for the same reason. [5]

It contains an anti-spasmodic and anethol agents and may be helpful for management of primary dysmenorrhea. [6]

Fennel water (infusion/tea) is often used to ease colic in babies. If drunk during breastfeeding it may help reduce colic in the infant. Fennel also has a mild diuretic action and a cleansing action on the kidneys and is thought to promote the flow of breast milk in nursing mothers.

Food and plant extracts that have a phytoestrogen activity (an estrogen-like activity but extracted from a plant) in the body can help to alleviate some symptoms of menopause. Foods naturally high in phytoestrogens include fennel, celery, parsley, flaxseed oil, nuts and seeds. [7]

A strong tea can be used as a gargle for gum disorders, loose teeth, laryngitis or sore throats.

Powdered fennel seeds can be used to repel fleas from your dog’s bed.

Fennel compares favorably to ascorbic acid for its anti-oxidant activity!

Externally A decoction of seeds makes an anti-inflammatory eyewash for sore eyes and conjunctivitis.

Dose: 1 teaspoon of freshly ground dry fennel or anise seeds per 8 ounces of hot water (you can also decoct (boil) the seeds if you don’t want to grind them); 2-4 mL 3x/day of a 1:4 tincture. To help ease constipation, use the roots. Daily finely chop and mix with bran and molasses.

“Above the lower plants it towers,
The Fennel with its yellow flowers;
And in an earlier age than ours
Was gifted with the wondrous powers
Lost vision to restore.”
~ Longfellow 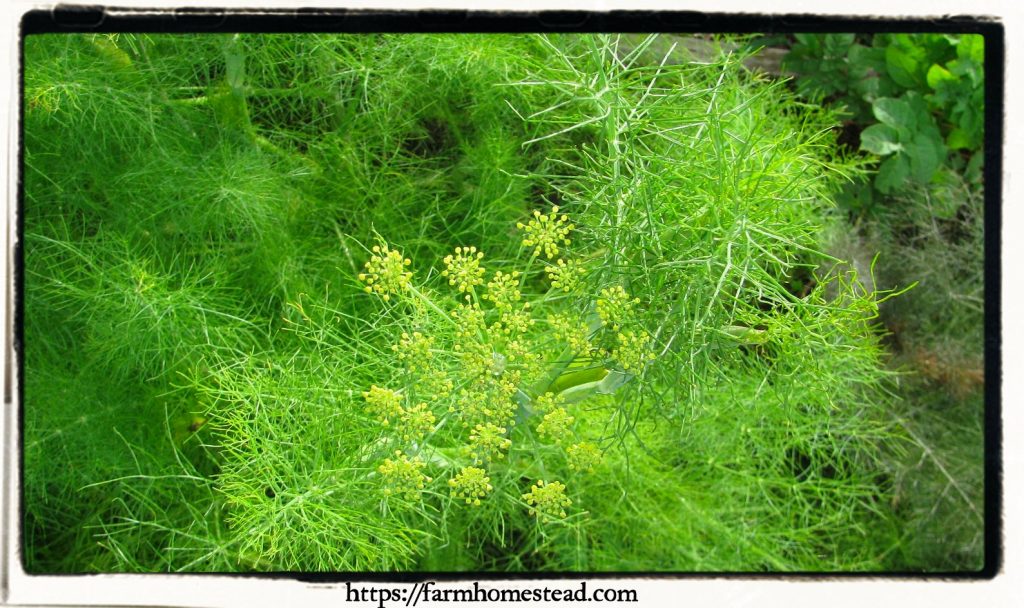 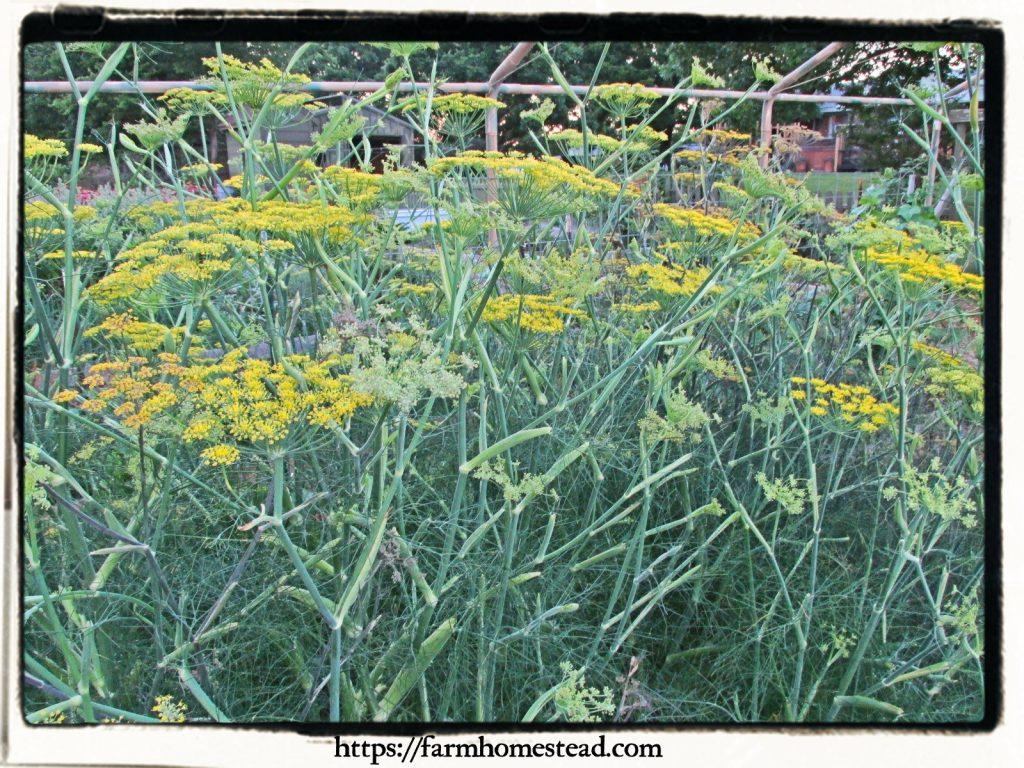