parts used: root, leaves – cooked. It contains up to 44% inulin. Inulin is a starch that cannot be digested by humans. It usually passes straight through the digestive system. Inulin can be converted into a sugar that is suitable for diabetics to eat.

The ‘father of medicine’ Hippocrates said Elecampane stimulates the brain, kidneys, stomach and uterus and the great Roman naturalist Pliny wrote ‘let no day pass without eating some roots of Elecampane to help digestion, expel melancholy and cause mirth’.

One of Elecampane’s common names ‘Horseheal’ was derived from its use by veterinarians in treating lung disorders in horses. The Latin name ‘Helenium’ comes from the legend of Helen of Troy who was said to be carrying the plant when abducted by Paris.

It is a popular remedy in coughs, but is often used without sufficient discrimination; for while it answers an excellent purpose in sub-acute and chronic cases where the lung structure is relaxed and expectoration viscid or too profuse, (as in humid asthma,) it is not suitable for cases of any class where the lungs are irritated or dry–as it then increases the dryness, and gives a feeling of constriction.
– King’s American Dispensatory, 1898

The leaves are rather bitter and aromatic, they were used as a potherb by the ancient Romans but are rarely used at present.

A blue dye is obtained from the bruised and macerated root mixed with ashes and whortle berries (Vaccinium myrtillus). The root yields up to 2% of a camphor-scented essential oil, this is used as a flavoring and medicinally.

Elecampane roots are one of the greatest source for inulin. You can really see the inulin when you make a tincture and it sets awhile in the bottle. There will appear to be a milky substance in the lower third of the bottle. It is a starch that healthy gut bacteria like to feed on. I’ve even heard inulin referred to as a “probiotic.” According to Matthew Wood, “Inula is nutritious and rebuilding in old, worn-out, exhausted, and broken-down states, with poor nutrition and assimilation.”

Fill a small jar 1/2 full with thinly sliced fresh Elecampane root. Pour honey into the jar, covering the root. Honey will extract moisture from the root, so leave a little empty space at the top of the jar. Turn the jar over periodically for full coverage of the root. Let sit for 4 – 6 weeks and then store in the cupboard. Take directly by the spoonful or add to tea. Also, you can suck and chew on the slices of the root. (source unknown)

An extract of the plant is a powerful antiseptic and bactericide, particularly effective against the organism that causes TB. The root contains alantolactone, which is strongly anthelmintic. In a 1:1000 dilution it kills the parasitic worm Ascaris in 16 hours. Alantolactone has an anti-inflammatory action, it also reduces mucous secretions and stimulates the immune system. The plant is sometimes recommended as an external wash for skin inflammations and varicose ulcers, but has been known to cause allergic reactions.

Elecampane oil has been used for hundreds of years to settle stomachs and aid digestion. It can also improve nutrient intake and eliminate parasites, such as intestinal worms. 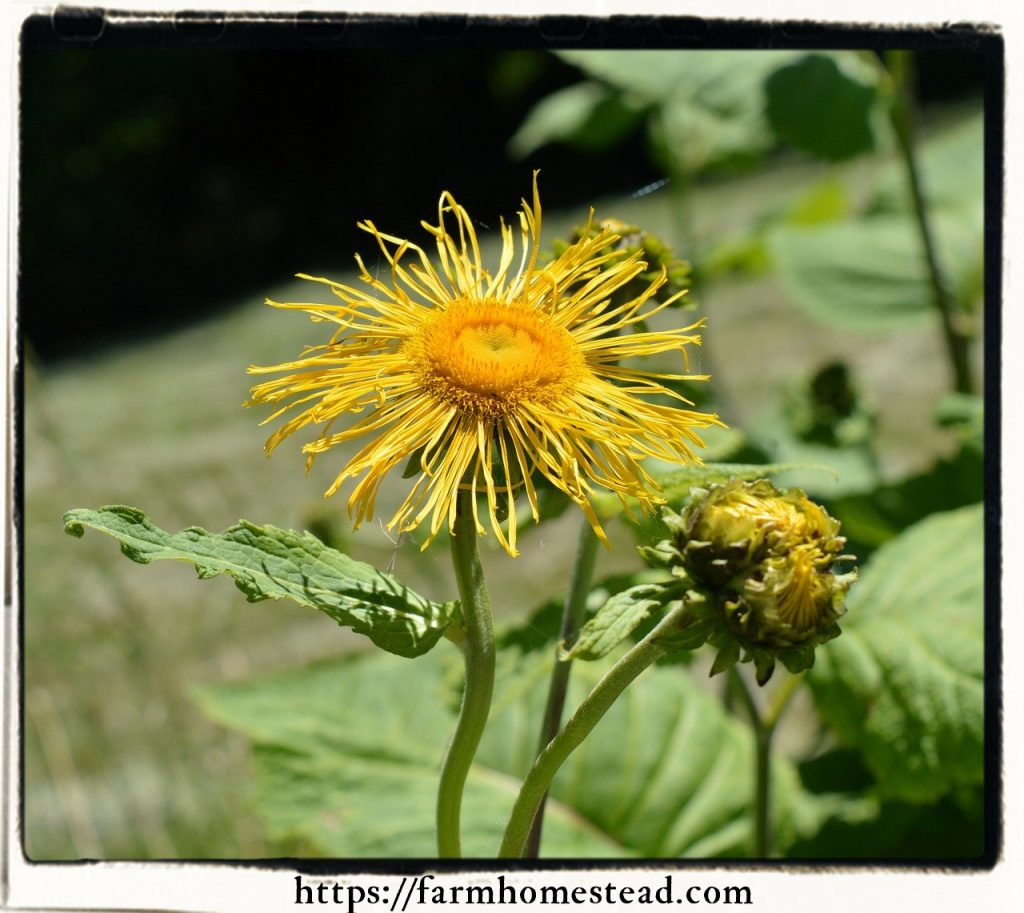 “It is an hearbe greatly to be esteemed of students, for by a special property it driveth away heaviness of mind, sharpeneth the understanding, and encreaseth memory.”
~ Thomas Coghan, a 16th Century Oxford Don6