Dandelion (Taraxacum officinale) is an herbaceous plant belonging to the Asteraceae family. These plants are also known as Common Dandelion. They are often found growing in lawns and at roadsides of temperate regions. Dandelion is considered to be a weedy species by some people; however these herbal plants can be used for many culinary purposes and a great supporter of health.

Regardless of the fact that these plants are considered to be one of the most common weed plants found in many countries, they are beautiful little harbingers of spring. It simply amazing to me that so much money is spent every year trying to rid ourselves of one of the most medicinally helpful plants on earth.

They will grow to a height that can range between 2 inches (5 cm) and 15 inches (40 cm). Dandelion plants grow from taproots with 1 to 10 stems growing together from each taproot. The straight, purplish stem usually holds the flower heads in a higher position than the foliage. It can be devoid or covered with short hair. The leaves grow in rosettes. The leaves are obovate or oblanceolate in shape – gradually narrowing as their bases approach the petiole. They usually have sharply toothed edges.

Flower heads consists of 40 to 100 florets. The corolla is bright yellow to orange-yellow. The calyculi have 12 to 18 reflexed and glaucous segments. The oblanceolate shaped fruits are called cypselae and usually a straw color. The white or silver silky pappus forms the parachute. These tiny and perfect parachutes enable the wind to carry them far and wide.

Some of the most intense micro photographs of the dandelion I have ever seen can be found at A Close-up View of the Wildflower “Dandelion” by Brian Johnston.

The dandelion is originally native to Eurasia. But they now call Australia and the Americas home. They can be found in all the 50 states in USA as well as in most of Canada.

Dandelion is a Worthy Weed

Reality is that dandelions are often considered obnoxious weeds. But there are many benefits to keeping them.

“Dandelion, like burdock, is one of the most esteemed herbs in healing.
To make Dandelion Cordial, harvest 2 to 3 cups dandelion blossoms, 2/3 cup sugar, rind of ½ organic lemon, 1 quart vodka. Cut off green bottoms of unwashed blossoms. Mix all ingredients and put in a jar, capping and storing in a dark place. Shake daily to dissolve sugar. After two weeks, strain through filter paper and store in a bottle with a tight fitting cap.” (source) 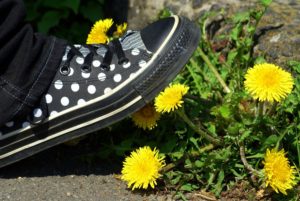 Cultivation of the Dandelion

It is easy to grow dandelions for edible and medicinal purposes. They are hardy perennials and grow in most all soils. They grow all year in milder regions and die down during colder winters. However, the taproots remain quite viable, to the vexation of lawn owners.

Dandelions can survive in any type of soil; however, they are known to have a preference for well-drained and humus rich soil. The pH level of the soil should ideally be above 7.0. They grow well both in direct sunlight and partial shade. They can tolerate low temperatures down to -20°F (-29° C).

Fertilizing is not terribly important. Dandelions are more commonly found in gardens and lawns that are not very well-fertilized.

If you want to use the leaves, you should harvest them before the plant goes to seed (otherwise they turn bitter). The ideal time to harvest is before the young plants develop flower buds. The bitterness of the dandelion is what makes it a good “liver herb”, but if you cannot stand it and the flower buds have already started growing, then cut the whole plant to the ground and wait for it to grow again. 🙂

The roots can be harvested from fall to spring. Look for the biggest, thickest clumps of dandelion leaves, as these are usually fed by a nice, fat root. The roots are easier to pull out when the soil is soft and moist. They have a long taproot and using a dandelion digger makes this a far easier job. Sad, that the tool was designed for getting rid of a “weed”, but cool for those that know its true value and wish to harvest it. Yup, they make a special tool for digging up dandelions. Even one that you don’t even have to bend over to use. You can also just use a long flat screwdriver.

While you can harvest the roots anytime, fall is the best time for dandelion root digging due to the significantly higher concentration of the prebiotic inulin. (helping gut microdome along!) Dandelion roots harvested in fall are less bitter and slightly sweeter than spring roots.

You can roast the roots to store them for medicinal purposes. Wash the soil from the root, chop them into small pieces and place in an oven at 250°F(120 °C). If you leave the oven door ajar, moisture can escape and you can dry and roast at the same time. Two hours is usually sufficient. Turn them off and on until they are dry to ensure even drying. They will shrink to a quarter of their original size and turn brown.

The dried or roasted roots can be ground to use for tea or use them as a vegetable in soup. Dandelion greens or leaves are usually eaten raw or cooked fresh. They have a peppery taste.

The most interesting thing about the dandelion is in spite of the fact that it has a reputation as a weed, it is the cheapest medicine on the planet and so many want it dead.

The common dandelion is an amazing species of herbal plant offering benefits too many to count. These weeds are not trouble but a blessing for any garden. Thankfully, they are increasing in popularity both as leafy vegetable an herb used to support wellness.

To preserve the fresh yellow bliss of the blossoms through the entire year… (based on a recipe by Dana Woodruff)
Ingredients:

“Dandelion suits people who have a tendency to cram far too much into their lives. They are so full of enthusiasm for life that they take on too much and become compulsive ‘doers’. They overplan and overstructure their lives in an effort to fit in everything they want to do, and leave little room for relaxation or reflection, until the point is reached where they no longer know how to be quiet or relaxed. They leave little space in their lives for spiritual or emotional expression, and as they push themselves beyond the body’s natural capacity, they no longer listen to the needs of their bodies. Such harsh physical demands and unexpressed inner life creates great tension, especially in the muscles of the neck and shoulders. Dandelion helps to release this tension, allowing the body to relax and emotions to be release and expressed. It can be added to massage oils and used in bodywork. It enables you to listen more closely to emotional messages and bodily needs, and shifts the emphasis from being a human ‘doing’ to a human ‘being’. Energy, activity and enthusiasm become balanced with a sense of inner ease.” [5]

Dandelioness Herbals has a page that you will enjoy if you’d like to know more about the dandelion! (recipes included) Dandelions Are Here!

“But, like all good rebels, the dandelions are irrepressible.”
– Guido Masé, herbalist and author of The Wild Medicine Solution