Greater Burdock is rather tall, reaching as high as 6 feet (2 meters). It has large, alternating, cordiform leaves that have a long petiole and are pubescent on the underside.

The flowers are purple and grouped in globular capitula, united in clusters. They appear in mid-summer, from July to September. The capitula are surrounded by an involucre made out of many bracts, each curving to form a hook, allowing them to be carried long distances on the fur of animals. The fruits are achenes (a type of simple dry fruit); they are long, compressed, with short pappuses. The fleshy tap-root can grow up to 3 feet long.

How to Use Burdock

According to jim mcdonald (http://herbcraft.org)

… In autumn, these flowers are replaced by round brown burrs that persist into the winter. The seeds contained in these burrs are also used medicinally. Their use is similar, though the seeds are used for acute disorders (their action is quicker to manifest, but less permanent) while the root is preferred for chronic conditions (it’s slower to manifest, but yields more permanent results).

In Japan, roots are used as a vegetable called gobo. The stalk, with the outer skin removed, is a tasty raw vegetable. Young greens can be cooked as a bitter vegetable; roots, cooked into a nutritious soup.
As a source of inulin, the root is best dug and used in autumn. Even though slightly bitter, burdock feeds not only the gut flora, but is considered a digestive tonic as well.

Burdock is really good to make “french fries”. Peel your burdock root, slice into fries and place in the oven with oil and salt and cook for about 15 minutes at 450F. YUM.

This drink is a little like a root beer and somewhat like sarsaparilla. It is an old drink, dating back to the 13th century in England. The recipe here is a more modern, sweet version, but you can leave the sweetness out if you prefer, or substitute sugar for honey.

Burdock root is probably the most important detoxifying agent in the herbal arsenal. It cleanses the blood by increasing the effectiveness of all the body’s elimination systems. Burdock’s diuretic effect helps the kidneys filter impurities from the blood. It helps push toxins out through the skin, and it also boosts the ability of the liver to remove toxins. The bottom line is that by pushing toxins out through a variety of pathways, burdock can purify the blood with minimal side effects and with minimal stress to the body.

Burdock is valued in many cultures for its safety and effectiveness. The root, leaves and seeds were known to the ancient Greeks as healing remedies, and with the exception of traditional Chinese medicine which employs seeds, it is the roots that are used today as both a food and a medicine.

Burdock is considered a strong liver purifier with particular value for arthritic, glandular, and skin problems. Burdock root aids several of the body’s organs in elimination, including kidneys, lymph nodes, colon, and skin. It is said to eliminate toxins from the blood very rapidly and has been used as an antidote for poisoning. It helps to clear the blood of harmful acids due to calcification deposits. It has been used as a poultice as a remedy for sores and bug bites, and has also been used for skin cancer.

Burdock affects the pituitary gland helping to release protein in proper amounts, thereby maintaining hormonal balance. Burdock is considered safe for use in pregnancy as it is mineral-rich and can help balance the body’s systems as well as hormones. It can also help prevent water retention and jaundice in an infant. Europeans have used the root as a remedy for prolapsed or displaced uterus. [1] 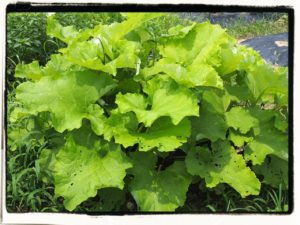 Burdock is a staple in skin and liver support.

The Chinese used burdock for skin complaints such as acne and eczema. There was also a controversial case involving burdock back in the 50’s. A doctor called Harry Hoxsey had created a number of cancer treatments. The treatments used secret formulas and often contained wild flowers and plants. Hoxsey had a case brought against him by the FDA because he didn’t fully label his treatments for cancer, one of which included burdock root. Interestingly, research has continued since then into the use of burdock as a cancer treatment.

An interesting study done on the use of Burdock with Burns and Wounds™ states “The use of this herbal remedy appears to be an acceptable alternative to conventional burn care for these types of burns. The trauma of dressing changes was virtually nonexistent.” Wow. You should read that study. Amazing results! [2]

Video! Find out how to use burdock (Arctium lappa) for medicine from these herbalists: Jessie Conway, Matthew Wood, Brigitte Mars and Mary Bove. Used to treat many skin conditions and for fat metabolism.

“On a psychological level, Burdock helps us deal with our worries about the unknown… which lurk in the dark woods beyond our control. It seizes upon deep complex issues, penetrates to the core and brings up old memories and new answers. It gives us faith to move ahead on our path, despite the unknown problems that might snare us on our way. It helps the person who is afraid become more hardy, while it brings the hardy wanderer back to his original path. It restores vigor and momentum.”
~ Matthew Wood, Herbalist [4]

“In the traditional herbalism of Europe and North America, burdock (Arctium lappa, A. minus) is probably the most prominent herb for skin complaints, such as acne, boils, or eczema.”
~ Paul Bergner, Folk Remedies Database