Since ancient times, (herbs all have long histories, remember?) the leaves of the blackberry plant have been used curatively, especially throughout Europe and Asia. For example, two thousand years ago, the roman army doctor Galen had his soldiers chew the leaves to strengthen gums and build up physical resistance; today, we know it was the vitamin C and tannins in the leaves that he was counting on to boost immunity and heal wounds. [1]

There are many subspecies of this plant (Rubus), but all work equally well for all herbal remedies, though taste and texture vary.

Blackberries are part of the rose family and have the characteristic flowers, leaves, and thorns very much like those found on the wild rose. They have a very sprawling habit and tend to take over wherever they can get a foothold with arching, thorny branches. My grandfather used to reach under the arch with his large, long arms and hold them up while us kids went under his watchful care into the little thicket there to gather all the berries we could reach trying our best to avoid the thorny branches that catch on your clothes and scratch your skin.

All through the summer, you can see the berries in various stages of ripeness and flowers in all stages of blooming, making it somewhat unique. In most common species, the flowers are white and the berries proceed from white, to red to a purpley-black ripeness. The berries look similar to a bunch of tiny grapes and many tiny seeds, like raspberries or mulberries. 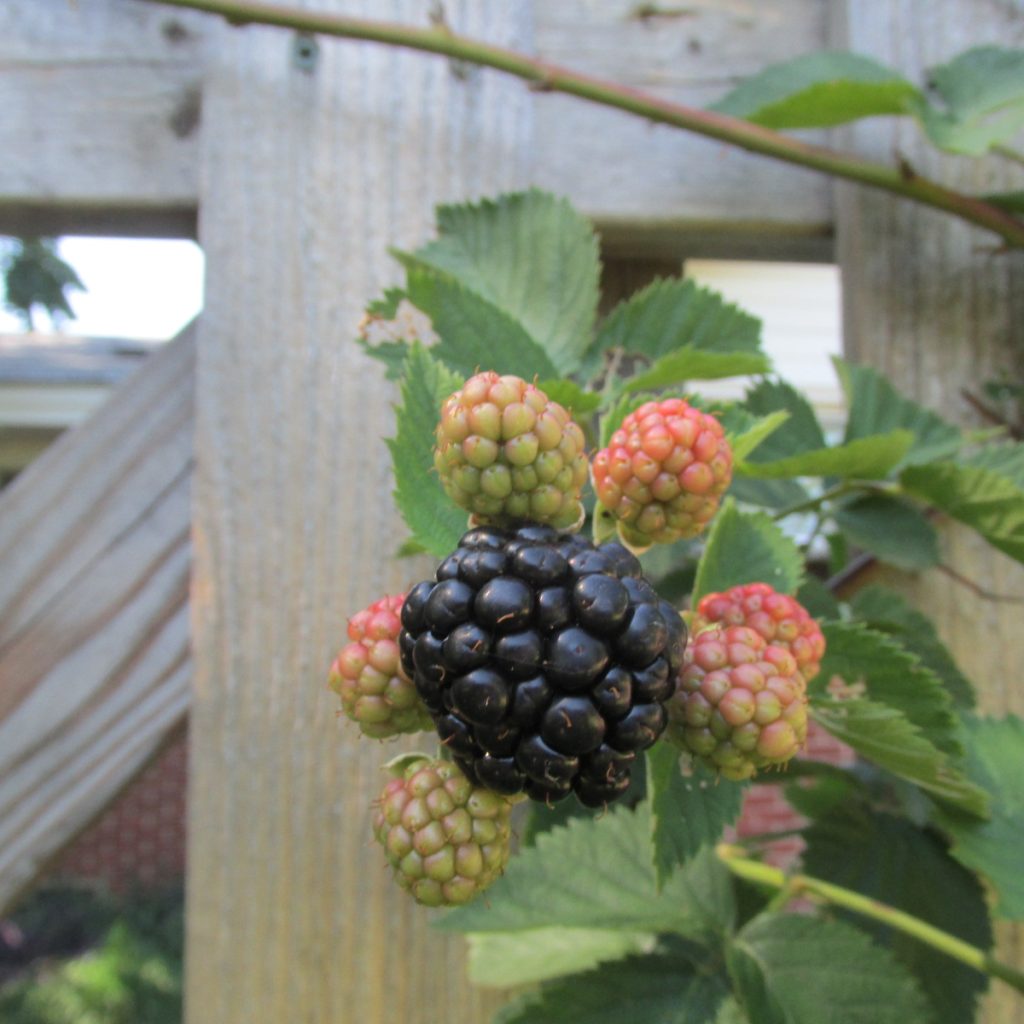 Leaves are ovate, double-serrate and pinnate with 3-5 leaflets. Flowers have five petals and the canes are studded with curved prickles.

How the Cherokee used Blackberry

One of the herbs known the longest time for soothing stomach problems is the blackberry. Using a strong tea from the roots is helpful is reducing and soothing swollen tissues and joints. An infusion from the leaves is also used as a tonic for stimulating the entire system. A decoction from the roots, sweetened with sugar or honey, makes a syrup used for an expectorant. It is also healing for sore throats and gums. The leaves can also be chewed fresh to soothe bleeding gums. The Cherokee historically use the tea for curing diarrhea. [2]

The leaves have been traditionally used in herbal medicine as an antimicrobial and for their healthful antioxidant properties. A laboratory study published in the “International Journal of Antimicrobial Agents” in July 2009, conducted by researchers from the University of Siena, Italy, confirmed the usefulness of blackberry leaves for these purposes. Blackberry leaf extract was demonstrated to be effective against Helicobacter pylori, the bacteria associated with causing stomach ulcers. The study identified blackberry leaves as an effective alternative to antibiotics often prescribed to fight H. pylori. [3]

The leaves of the blackberry are best harvested before flowering as the plant is putting its energy into growing rather than in the pollen or fruits.

Roots can be dug in the spring and fall. After the berries have been harvested in the second year is the best time for this. They should be dried quickly, in the oven or under the hot sun.

Young leaves have high levels of antioxidants, or oxygen radical absorbance capacity, according to a study conducted by the U. S. Department of Agriculture’s Agricultural Research Service and published in the “Journal of Agricultural Food Chemistry” in February 2000. The USDA study found that the leaves of blackberry and raspberry, the portion of the plant used in tea, were higher in antioxidant compounds than the berries of either fruit. [4]

Fermenting blackberry leaves enhances their flavor and therapeutic effect. To ferment, crush slightly wilted blackberry leaves with a rolling pin. Wrap the leaves in a damp cloth or roughly chop them and put them in a large jar and place them in a warm place. (like the top of the fridge) After two or three days, the leaves will exude a rose like scent or something similar to a ripe banana. (I’ve read it is comparable the bergamot in Earl Grey) At this point, remove the leaves from the cloth; let them dry before using. [5]

The root is a strong astringent that has use in smoking mixtures. Be sure to powder the root and mix well. The bark of the stems can also be used. The leaves are very gentle, and can be added also. Any Rubus like Raspberry, Loganberry, Thimbleberry, and Salmonberry might be useful additions. [6] Historically, blackberry leaf herbal cigarettes were introduced by the Indians. Blackberry leaf does not contain nicotine so it can be used as an aide for those who want to stop smoking. See this link for more info on Smoking Herbs to Quit Tobacco

Blackberries provide numerous internal health benefits, but they also benefit us externally, contributing to more vibrant skin and softer, shinier hair (yes, you can put food in your hair!). Loaded with vitamins A and C, blackberries are the perfect age-fighting ingredient for a facial mask or scrub. Here are four Blackberry Recipes for Skin, Face + Hair you may enjoy trying.

Blackberry seed oil has a superior nutritional profile containing 83% essential fatty acids, as well as vitamins A and E. Its anti0oxidant nature means it is useful for both preventative methods for skin care as well as for healing already damaged skin. Additionally, blackberry seed oil also has broad-spectrum UV-protectant properties and can be used to make your own sunscreen blend.

The blackberry fruit is especially good for the liver and kidneys, the leaves for stomach and intestines.

Anthocyanocides contained in blackberry leaves act as powerful antioxidants that are essential for reversing cell damage resulting from free radicals which makes drinking the tea a very useful herb for wellness. Blackberry leaves are not only rich in tannins they are also high in vitamin C, which boosts immunity and promotes tissue repair.

Thornless blackberry fruit and leaves have antioxidant properties, according to a study published in the February 2000 issue of the Journal of Agricultural and Food Chemistry. The study found that blackberry leaves had higher oxygen radical absorbance capacity than the fruit. [7] The oxygen radical absorbance capacity (ORAC) assay measures the radical chain breaking ability of antioxidants by monitoring the inhibition of peroxyl radical–induced oxidation. [8]

Blackberry leaf is often thought of as an astringent for the digestive tract (it is very helpful for diarrhea [9] ) and reproductive system tonic, but can also be used for the skin. Blackberry leaf is tonic and mineral rich, containing calcium, magnesium and manganese. Blackberry plants are easy to find in the wild-gather the young leaves before the plant begins to flower or fruit.

Blackberry is also approved in Germany for treating mild inflammation of the mucous membranes of the mouth and throat. This makes it helpful for relieving sore throat, mouth sores and gum inflammation. For these purposes, it can be used as a gargle, mouthwash or tea.

Preparations & Dosage:
The tannins in blackberry leaves tend to have a bitter flavor when the tea is steeped for too long. It is recommended that steeping time not exceed 6 minutes.

You can test this yourself… make two different cups of tea. Let one steep for 5 minutes and the other for 15 minutes. Try them both. Do you taste the difference?

Infusion: pour a cup of boiling water onto 2 teaspoonfuls of the dried herb and let infuse for 5 minutes. This may be drunk freely.
Tincture: take 3-5 ml of a 1:5 tincture 3x/day.